The hype is real... bodybuilding legend Cutler believes it's only a matter of time before Michal Krizo is standing next to the best: "he can get instant qualification for this year's Mr. Olympia" 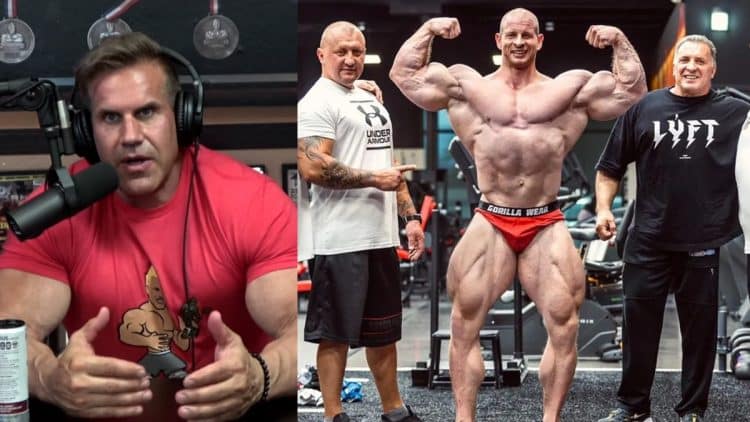 Bodybuilding legend Jay Cutler ruled over the Men’s Open division throughout his illustrious career. In a recent episode of Cutler Cast, Jay discussed bodybuilders in the Open class and gave his thoughts on the newly minted NPC athlete, Michal Krizo.

Cutler is widely regarded as one of the greatest bodybuilders to step on stage. His hard-fought battles with eight-time Olympia kingpin Ronnie Coleman elevated the sport. Having captured four Sandow trophies, Cutler’s dedication to his craft became one of his most notable attributes.

Jay said recently he had to separate himself from society and go to a dark place to maintain his position as one of the best bodybuilders in the world. After making those sacrifices, the legend has developed a keen eye for talent and believes the Open class (his former division) continues to improve. One bodybuilder on Cutler’s radar is Michal Krizo, who made a commanding first impression with the former Mr. Olympia last week.

“If this Krizo guy can get in the mix, I’m telling you… he’s the real deal. I’m excited. It’s going to be one of the most competitive Olympias in years” Jay Cutler said.

After the Slovakian mass-monster made his way to North America, he’s been on a legends tour since switching to the NPC. In addition to visiting Cutler and bodybuilding’s east coast mecca, the Bev Francis Powerhouse Gym, in Syosset, New York, he also took his monstrous build to the Dragon’s Lair Gym in Las Vegas. He posed in front of respected coach Milos Sarcev, who said, Michal is ‘100%’ committed to making an impact in his new federation/league.

Jay Cutler Examines the Open Class and Michal Krizo’s Physique: ‘He’s Got a Great Package, Everything is There’

During his latest podcast episode, Cutler discussed Krizo’s ceiling as a competitive bodybuilder and many of the contenders expected to push each other at 2022 Mr. Olympia.

“Listen, I’m going to talk about something. Michal Krizo. He’s the real deal… okay. So, I’m going to go on record right now and tell you guys if this guy wins his pro card in the IFBB Pro League, because he’s still an amateur. So, he’s going to do the Amateur Prague [and then the Prague Pro].

I feel he can win the amateur, he can win the pro, and he can get instant qualification for this year’s Mr. Olympia.” Jay Cutler said on Ep. 38 of Cutler Cast.

Cutler feels Krizo has the potential to win an amateur show, a pro show, and then earn his qualification to Olympia for later this year. Many have pointed to Krizo’s back as a possible weakness. However, 1983 Mr. Olympia Samir Bannout said he didn’t see any weaknesses in the newly signed NPC athlete. In fact, Bannout believes that Krizo has bigger arms and v-taper than Nick Walker despite having yet to earn his pro card.

Jay agrees that Krizo will be a problem for a lot of competitors this winter.

“He’s going to be a big problem. He is 100% legit. I know people are going to say, ‘his back’. His back is not that bad. He’s got a great package. Dude. He’s got the size, he’s got the width. That’s where he can be very dangerous for a lot of these people.

He’s got the width. He’s wide. I think, you know with some improvements, like everything is there, his condition, you’ve seen the most musculars are crazy but that doesn’t tell the whole story. The arms are huge, the delts, I mean, he’s got it all. The legs. He’s got a good physique. If he can put it together and get the qualification and the pro status, he’s going to be a big problem man. He’s for real.”

Cutler expects Krizo will be tasked with facing a deep lineup of talent at this year’s Olympia contest. Reigning champion Mamdouh “Big Ramy” Elssbiay is eager to prove he’s still the best in the world after his passion for the sport was brought into question for missing a guest posing appearance in Pittsburgh.

2019 Mr. Olympia Brandon Curry plans to add size to his physique ahead of this year’s show. Consistent finisher Hadi Choopan has also been working relentlessly to present his best package yet.

Fifth place finisher Nick Walker and fourth place finisher Hunter Labrada have ambitious plans, as many have pegged them as frontrunners heading into the marquee event. In addition, William Bonac is on a quest for redemption. He nearly won the title at the 2022 Arnold Classic and is determined to win his first Sandow trophy.  There are so many high-level competitors this year and with that in mind, Cutler still sees Krizo as a problem.

“You know, with [Nick] Walker and Hunter [Labrada], who both sat on the sidelines to compete solely for the Olympia, I’ve done that before and I improved. I think Hunter is going to be much improved. I think Walker will be improved. I see Iain [Valliere], if he can get some more detail, I see him. He’s definitely made improvements.

[William] Bonac, obviously, he had some issues with the surgery or whatever, he’s a frontrunner. You know, you still got Brandon [Curry] who’s is a full force. You got Hadi Choopan that gosh know what he’s doing. And of course, Big Ramy, who’s the champ. This top ten is going to be sick. Samson. You got Charles Griffen, so many guys that are in great condition.” Jay added. “You can’t count these people out. Can you imagine this lineup bro. It’s going to be crazy.”

Cutler and Bannout weren’t the only veterans to compare Krizo and Walker’s physiques. Lee Priest recently discussed how Krizo would fare against the 2021 Arnold Classic champion. While Priest won’t be sure until he sees a side-by-side comparison shot, he voiced that he favored Nick’s physique over the freaky build of Krizo.

As of this writing, Krizo has plenty of opportunities to earn his pro card. Should he claim victory at a pro show, the bodybuilder will be qualified to compete in the Open class at the upcoming Olympia contest in December.

In Cutler’s opinion, it’s only a matter of time before Krizo is standing next to other top athletes on the Olympia stage.