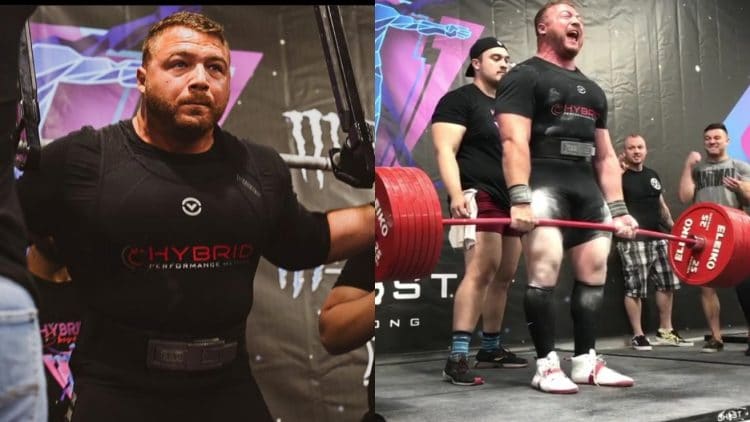 Marcus Leoni is a super exciting powerlifting prospect, competing out of Miami, Florida. Over the weekend he had a great performance, which culminated with him setting four new competion records.

Leoni is a big guy, competing in the 308lb class for the last two years. The 28 year old has had some pretty good performances over the three years that he has been competing, scoring wins in his four meets. As a result, he has begun gaining momentum, and really caught the attention of those watching closely.

Leoni may have had the best performance of his career so far, when he competed at the Hybrid Showdown II. It was one of his biggest meets to date, as he competed alongside the likes of Stefi Cohen, and even YouTuber Jujimufu. It was here that he managed to crush every single one of his competion records, with an outstanding performance. He went 7/9 on his lifts, with his scores adding up to a whopping 2160.5lb total. A big part of his first place showing was a strong 827lb deadlift.

Posting this video first because this is the one I’m most proud of. I love deadlifting and I’ve never made a third in competition truly pushing.
Thanks to @hybridperformancemethod and @alexuslar for putting on an amazing meet for us lifters. Huge thanks @lawladylifts for helping me stay sane leading up to this.”

As he explains in the post, this was the first time Leoni was able to go 3/3 on deadlifts. Moreover, it increased his PR by a solid 33lb. Add that to the fact his squat and bench went up by 22lb each, and that makes for a pretty great day at the office.

Marcus Leoni continues to demonstrate how much he has been growing and improving. It will be exciting to see how he continues to perform throughout the rest of the year.

CrossFit Muscle: Get Freaky Legs With The 20-Rep Squat Program