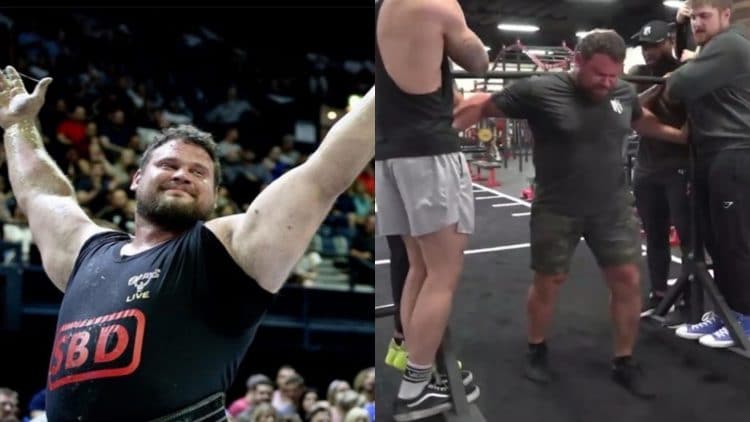 Strongman athletes are known for having a bit of fun while doing their training. This carried over  big time for Martins Licis, as he decided to do a ridiculous yoke carry.

Licis has truly become an ultra-impressive strongman competitor. He is the winner of the 2019 World’s Strongest Man, and managed to beat out some tough competition in order to do so. Moreover, after dealing with some injuries, he managed to make a comeback at the Arnold Strongman USA, earlier this month.

The Arnold Strongman Classic is the only major event that Licis has not won yet. However he is looking to change that in March, now that he earned his invite. Leading up to the contest, he is looking to train hard and be fully prepared.

Sometimes, Licis doing this hard work can come in the form of unique types of training. One example of this showed itself in a recent Instagram post. Here, he can be seen doing a yoke carry. Although this time, he is doing it with four grown men, instead of plates.

Check out the wild video:

“Training to carry a village at @zooculture with @bradleymartyn” Licis said in the post. “Carrying people is much harder than weights, almost feels like a chain yoke 😰 Thank you for joining in @mrcalliet , @jasonpostonpro , @mileshicksfit , and other strong gym-goers! 💪 And thank you @reignbodyfuel for the epic shooting Day!”

Alongside Martins Licis in the video is some pretty familiar faces. He is there with Bradley Martyn, as well as Corey Calliet, Jason Poston, and Miles Hicks. Even though he is no stranger to using humans for weight, he explains that this was slightly more difficult than a regular yoke, likening it more to a chain yoke.

Licis is truly working on establishing himself as the best strongman in the world. Whether or not doing this will help further that is unclear. Nevertheless, this is incredibly entertaining and insane to watch. Especially when considering he says it is about 1200 pounds he is lifting, all without a belt or sleeves.

What do you think about this crazy video from Martins Licis?