Life and Accomplishments of Janey Layug 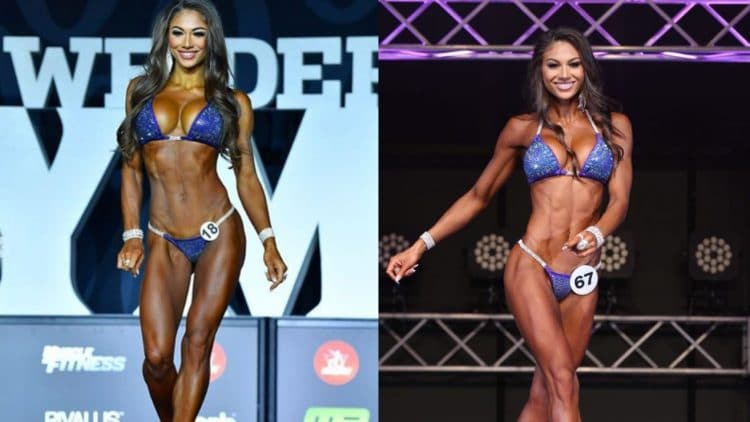 Janet Layug is a bikini competitor who has found a ton of success in her career. This is her life story, diet, training regimen, and more.

Janet Layug found a love for modeling from the moment she first found it. As she explains, she got her start while working in retail. She went to watch a sports game at her local Hooters when she was handed an application there on the spot. From there, she managed to enter and win a spot on the Hooter’s Calendar.  Moreover, she went on to be on the cover of the 2015 edition, as well as winning the 2014 Miss Hooters International Swimsuit Pageant.

It was due to her enjoyment of doing this, that caused Layug to give bikini bodybuilding a try. Her first contest was the 2013 NPC National Championships. She managed to win first place here, earning her Pro Card in the process. On top of that, it gave her a boost in visibility, with people realizing how talented she was.

Layug competed for the first time as a pro athlete at the 2014 Arnold Classic. She was unable to continue her winning ways here, earning 8th in the Bikini competition. However, she would not be deterred, winning the Battle on the Beach show later that year. She would close out her first year as a pro competitor, with a fourth-place showing at the Pittsburgh Pro.

Following this decent first pro year, Layug began to take things more seriously in 2015. She came back to score a much improved 3rd place at the Arnold Classic, as well as winning the Arnold Classic Australia. This victory earned her a spot in her very first Olympia, where she scored a very impressive 2nd place. It was at this point, that people began to realize that she fully established herself as someone to take seriously.

2016 saw Janet Layug take a step back, only competing four times. Moreover, her best performance of the year was only a 2nd place at the Arnold Classic Australia. The next year would see much of the same, with her only scoring 2nd at the 2017 Asia Grand Prix. She began to realize that she needed to make some serious changes.

Those changes became completely obvious in 2018, as Layug came back looking better than ever. She completed six rounds of competition, floating around the 3rd and 2nd position. However, when she ended the year with a win at the Shawn Rhoden Classic, it was clear that she was beginning to turn the corner with her physique.

Layug began finding her stride in 2019, having some amazing performances. Although she landed 2nd place at the Olympia, she won the four other times she took the stage. This included a win at the Arnold Classic Australia and Bikini International contests. She seemed to have figured out where her training needed to be, and the results were evident in the package she took to the stage.

Janet Layug tends to put a ton of emphasis on her glutes. In fact, she refers to those types of exercises as her favorite to do. On the other hand, she also focuses hard on cardio, often using it as a way to relax. When she is not relaxing though, she will do a splash of High-Intensity Interval Training. This keeps her physique toned, and lean.

When it comes to her diet, Janet Layug takes things very seriously. She preps her meals in advance, to allow her to keep close track of the nutrients she consumes. She eats 5-6 meals a day, intensely monitoring her macronutrients.

Layug usually builds her diet around leans meats, such as chicken and turkey. When it comes to vegetables, she can not get enough. She loves to eat sweet potatoes, as well as roasted Brussels sprouts and cauliflower. Moreover, Janet stays away from dairy products, so no milk or cheese. However, when it does come to cheat days, she does love a juicy cheeseburger!

When Layug is not competing, she spends her time working as a nurse. She loves to help people. Not to mention her general knowledge of the human body helps her with fine-tuning her training skills. Furthermore, she has shown interest in trying to earn her Nurse Practitioner license.

Janet Layug seems to be reaching her peak, in terms of her competitive ability. Although she is young in her career, she seems to finally be finding her groove. It will be fascinating to see how far she is able to go. As of right now, things seem bright for her future.

If you think of the most well popular and well-respected bodybuilder of Brazil, the name that comes to mind is...