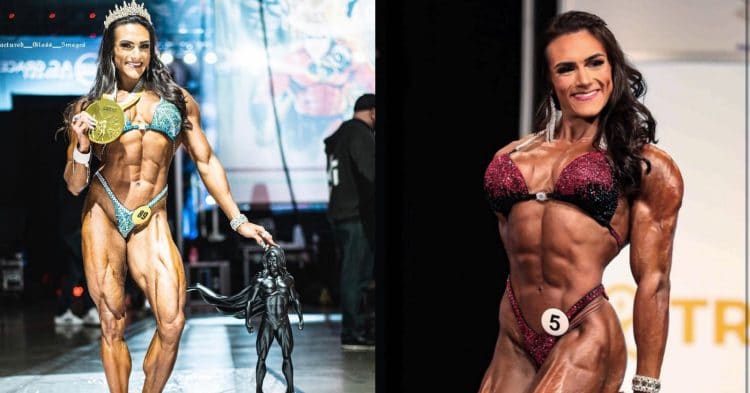 Natalia Abraham Coelho is an IFBB professional Women’s Physique competitor and a two-time winner of the Physique International (Arnold Classic) contest. This is her complete profile, biography, training regime, diet plan, and more.

Natalia Abraham Coelho was born in New York, USA but moved to Brazil at about 10 or 11 months old and grew up in Rio de Janeiro before moving back to the United States at age 15.

Playing sports as a youth in Brazil

As a youth in Brazil, Natalia was involved in many sports, one of which was not surprisingly soccer; a mandatory activity in Brazilian schools according to Coelho.

She also played basketball, volleyball, and also took an interest in swimming and ballet.

But she really enjoyed practicing Muay Thai, a martial art that her brother introduced her to because he would train at a gym.

Natalia says her brother would come home and play fight with her but she wanted to learn how to fight back. So she also joined the gym and explained the class was only boys. That didn’t stop her from wanting to train.

“I didn’t care I would go there and get punched in the face.”

Moving to the US

By the time Natalia was 13-14 years old, her mother had decided to move to Florida as she had a job opportunity.

It was an extremely hard choice for her to make but ultimately, she chose the US. While her brother did initially come to Florida with her and their mother, he much preferred Brazil and moved back just a few years ago.

For Natalia, however, it was the greatest thing that could’ve happened for her.

“When I look back, I could not be more thankful because I only found myself when I moved here.”

She admitted to having taken a strong interest in bodybuilding at a young age and while she lived in Brazil. She’s even said the 90s were her favorite period in bodybuilding.

However, the sport was not very popular in the country she’d grown up in and so Natalia says she kept her interest a secret because it wasn’t as accepted.

So she’d go to the gym, study physiological books and admire the physiques of bodybuilders such as 6x Mr. Olympia Dorian Yates.

The two-time Arnold Classic champ started training seriously when she moved to the US at 15 years old. At first, she struggled due to the language barrier, however, she was determined to learn English especially to do well in school. She learned quickly and in 5 months could fully understand the English language.

“Life is too short to be anything but happy.”

“Love deeply, forgive quickly, take chances, give everything with no regrets and forget the past with exception of what you have learn and remember that everything happens for a reason.”

“Every situation in life is temporary, so when life is good, make sure you enjoy it and when life is not so good, remember that it will not last forever.”

Natalia Abraham Coelho has an incredibly impressive resume. She turned Pro at 19 years old and also competed in her first Olympia (The most prestigious event in bodybuilding and fitness) at the same age.

She’s competed at the Olympia an astounding 6 times by the age of 24.

Coelho competed in the Figure division for her first two Olympia appearances before switching to Women’s Physique, the division she competes in currently.

After talking to judges, she determined that Women’s Physique was probably the better category for her and it truly was after placing really well in her first Physique shows. Olympia host Bob Chicherillo apparently also played a part in convincing her to try Women’s Physique. Since making the switch, she’s placed top three in every competition and has been the runner-up at the Olympia twice.

Natalia believes it’s “just a matter of time” before she wins the Olympia.

The 25-year-old top-ranked competitor is big into the power of the mind and visualization. We’d say it’s worked out quite well for her.

“If I believe that I’m going to win the Olympia, just by saying that out loud and repeating to myself, I’m making it more possible.”

Natalia doesn’t seem to have a lot of structured and detailed training footage. However, she has talked about how she approaches her workouts.

Natalia likes more volume type training as it’s easier on the joints compared to focusing just on heavy training. She does believe training depends on the person overall.

Her training strategy typically involves doing 8-10 reps per set, and she likes to use methods such as supersets, drop sets, and usually mixes things up.

Natalia is very strict when it comes to her diet and nutrition. She’s very conscious of what she puts into her body because she knows it has a massive impact on her success and health. It also allows her to compete many times per year as she chooses to also stay lean and in shape unlike many who gain a lot of weight during the offseason.

While her food choices and macros do change with her progress and from show to show, we’ve included some details on her diet choices during the quarantine and both pre-contest and off-season.

If you’ve watched some of her content, you’d know she likes pineapple but she recently also introduced more coconut water in her diet for its benefits.

During quarantine, she would have 300 g of carbohydrates per day and carbs for every meal. She’d also have about 30-45g of protein per meal and ate six meals per day. On the weekend she’d also have an extra meal.

The biggest difference between her pre-contest and off-season is the quantity of food and she sticks with six meals per day. Natalia also changes her diet regime for each show because the body’s response to nutrition changes too. She often incorporates carb cycling.

Natalia takes zinc, magnesium, and GABA supplements to help her sleep but feels it’s also good for her health.

In an interview with Dennis James back in May 2021, Natalia said she was single. However, her ideal partner is a bodybuilder (not necessarily competitive) as she’s attracted to big and strong guys.

She’s dated a bodybuilder in the past but she’s just focused right now and feels having someone right now would just be a distraction.

The Orlando, Florida-based competitor has a bachelor’s degree in Exercise Science and is a “gut expert” according to her social media details.

Her mother is undoubtedly her biggest supporter and often travels with her. She does have a good relationship with her father even though he lives in a different country.

“Stay focused & committed to your vision no matter what. Make it so real in your mind & identity that your reality has no other options but to shift and align with your vision. Even when no ones else believes in you & sees it. You must believe in yourself and see it for yourself. For we walk by faith not by sight. May God bless eqch one of your hearts and give you strength to pursue your dreams💎“

Natalia Abraham Coelho has come a long way from a little girl in Brazil to the biggest competitive stage in the world. Coelho has had to overcome a lot of challenges and adversity but her perseverance and mindset earned her a top ranking in Women’s Physique.

Her work ethic and success have inspired many and her personality has made her a fan favorite.