Mat Fraser Shares The Secrets To His Massive Diet Of 9,300 Calories A Day! 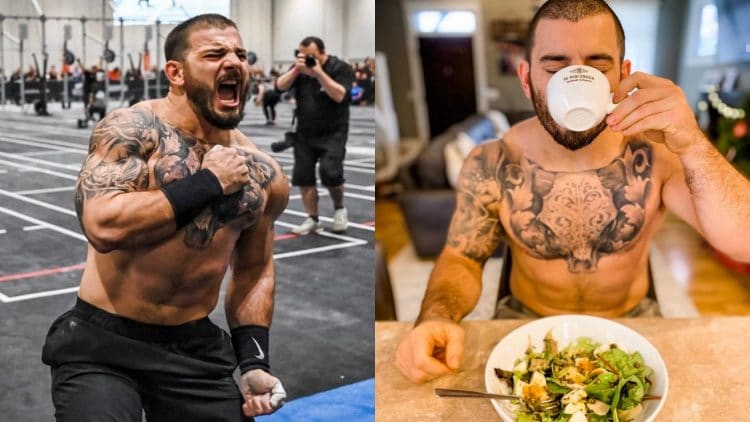 It comes as no surprise that someone as active and athletic as Mat Fraser needs to eat a ton of calories. However, you would not believe the secrets to his diet, which consists of over 9,000 calories a day.

Fraser is the four time winner of the CrossFit Games, and as such is one of the best athletes on Earth. He holds some serious accomplishment in the sport, and is a massive inspiration to those who aspire to be like him. But as anyone who has tried to achieve fitness goals will tell you, there is more to it than just hitting the gym. You also have to follow a specific diet for your own personal needs.

So what is the secret to the diet of Mat Fraser? Well turns out, it’s actually his fiancee Sammy Moniz. Mat and Sammy joined comedian James Davis on an episode of Nike’s Athlete’s Cookbook, where they discussed the diet of this CrossFit star.

Fraser explains that he would never be able to keep to a diet if not for Sammy. He even says that he has not turned on a stove in four years thanks to her. Moreover, with someone like Mat who needs to consume 9,300 calories to keep going throughout the day, they have to work together to fit in several meals throughout the day. When asked what Fraser’s diet consisted of, Sammy joked:

Part of what helps Sammy make sure Fraser eats enough is meal planning. So they decided to break down their beef stir-fry recipe, which makes several meals.

This is the recipe for Mat Fraser’s beef Stir-Fry:

Ingredients for the meat

For the Famous Fraser Beef Stir-Fry, you take the ingredients for the beef and mix them in a bowl, before letting the beef marinate refrigerated for 30 minutes. Add the hot water, sugar, sesame oil, and liquid aminos for the stir-fry sauce, and set aside, along with the two eggs which get scrambled. Heat up your pan and cook your beef to taste, then take it out of the pan.

Using the juices from the beef, cook olive oil, garlic, and onions for 5-7 minutes. Then add the rice, and your stir-fry sauce, before cooking for 5 more minutes. At this point, re-add the beef, peas and carrots, and eggs, cooking for a final 5 minutes. When eating, Fraser prefers to have it with slices of green onion on top.

Throughout the entertaining video, Fraser and his fiancee discuss his unique dietary needs. They explain that he had to make changes to his diet, strictly for the necessity of performance. The video ends with them getting James Davis to do some CrossFit workouts with them.

What do you think of this meal from Mat Fraser? Is it something you would try?