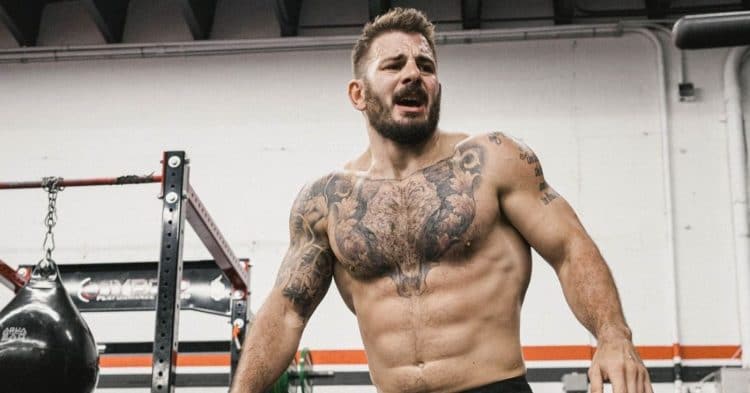 Nowadays Mat Fraser is retired from CrossFit, but he is still actively training with videos posted to his YouTube channel. The latest of these saw him going through an intense workout in his amazing new home gym.

Although he retired on top, having won five consecutive CrossFit Games titles, Fraser is still a part of the CrossFit community. Primarily, he’s been using his YouTube channel to promote his own brand of CrossFit style workouts, with the sentiment being HWPO, or hard work pays off.

He put this principle on full display with a recent video that he uploaded in which he was seen breaking in his new home gym. In this extensive facility, he goes through a brutal workout that will push anyone to the limits who dares to try it themselves.

Before the actual workout began, Fraser went through a warm up that could have been considered a workout in itself. For three rounds, he did 1 minute on the stationary bike, 10 dumbbell windmills, 20 lunges, and 20 rapidfire V-ups, just to get his heart pumping, while warming up all of the necessary body parts that will be worked during the session.

“One for the shoulders, one for the glutes and hamstrings, one for the core. I kind of use the warmups like putting in that prehab or accessory work. Two birds with one stone,” he said.

For the actual workout, Mat Fraser starts off with 3 sets of 6 deadlifts, doing 6 straight-leg box jumps in between each set. He explains that he likes the combination of the tension from the deadlifts, with the explosive movement of the box jumps, feeling like it is a good way to mix cardio with strength training.

Following that, the former Fittest on Earth moved on to a snatch balance for 7 reps, before doing some heavy overhead squats. Next up he pushed himself on the cardio bike, doing 4 rounds of 4 minutes on, 1 minute off.

To end the workout, Fraser concluded with a mix of sandbag cleans, assault bike, and max toe-to-bar intervals for three sets. He added this with 20 prone hamstring curls for 3 sets using a resistance band, and finally a sandbag bear hug walk.

“That was a good day. It felt good to just go, go, go,” Fraser said. “A good warmup, two pieces of weightlifting, one piece of pure cardio, one metcon, and then 2 pieces of accessory work… My lungs are burning, feels good.”

It is clear from this workout that even into retirement, Mat Fraser still has what it takes to be considered the best in the world. He has voiced considerations for an eventual comeback, and if it does happen he is clearly not going to be missing a beat.