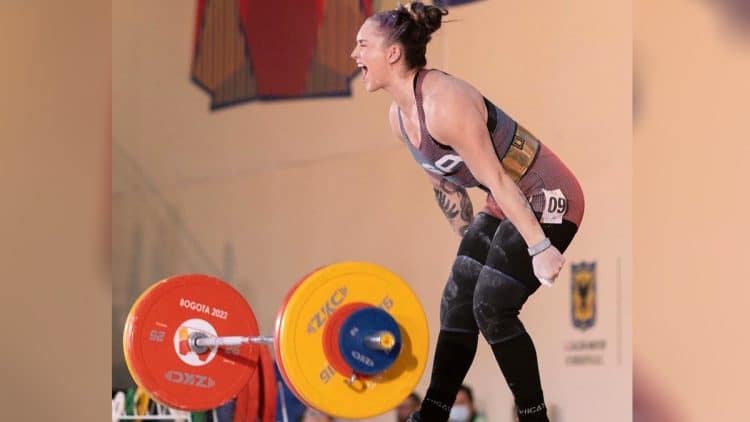 Mattie Rogers, an American weightlifter, made history at the 2022 International Weightlifting Federation (IWF) World Championships, as the action took place on December 13th, in Bogotá, Colombia. Competing in the 76-kilogram weight class, Mattie won a silver medal in each of the three events, becoming the first American weightlifter to stand on a podium on five consecutive editions of the World Championships in modern history.

In the Clean & Jerk event, Mattie lifted 138 kilograms (304.2 pounds), earning her first silver medal. Rogers then won a silver medal in the Snatch event, locking out 109 kilograms (240.3 pounds) over her head.

Mattie Rogers’ third silver medal came from her Total score, which is a combination of her Clean & Jerk and Snatch results. She lifted a total of 247 kilograms (544.5 pounds), cementing her place as one of the top weightlifters in the world.

“5th consecutive Worlds medals! Not my best day, but also not my worst & silver is silver! Walking away both bummed AND proud, always hard to be pleased with so many missed attempts on the stage, BUT can’t be mad at my medal streak living on for one more year.”

Sara Samir Ahmed was the only athlete who managed to surpass Mattie Rogers’ performance, having gotten gold medals in all three events. Sara Clean & Jerked 148 kilograms (326.3 pounds) and snatched 113 kilograms (249.1 pounds), which brought her Total to 261 kilograms (575.4 pounds).

Mattie Rogers is a veteran of the sport, having been competing in weightlifting for many years now. She has consistently placed well in competitions, and her performance at the 2022 World Championships is a testament to her skill and determination.

Having built a resume that the majority can only dream of, it would be understandable if Mattie Rogers decided to take it easy. However, she has displayed her champion mentality this year in full force, having set three new American National Records at the 2022 USA Weightlifting (USAW) National Championships Week. Apart from that, Mattie has also won and gotten podium finishes at multiple Pan American Championships, as well as made an appearance at the 2022 Tokyo Olympics.

It’s still hard to believe for many fans that Mattie Rogers is just 27-years-old, considering how much she has accomplished in the sport of weightlifting already. Mattie, alongside a few incredible athletes, are pushing USA towards the top of rankings and are inspiring many young athletes who could also make history in a several years time. Mattie took some time to address all the young athletes who look up to her, with her main advice being that the athletes should enjoy doing weightlifting and not put too much pressure on themselves.