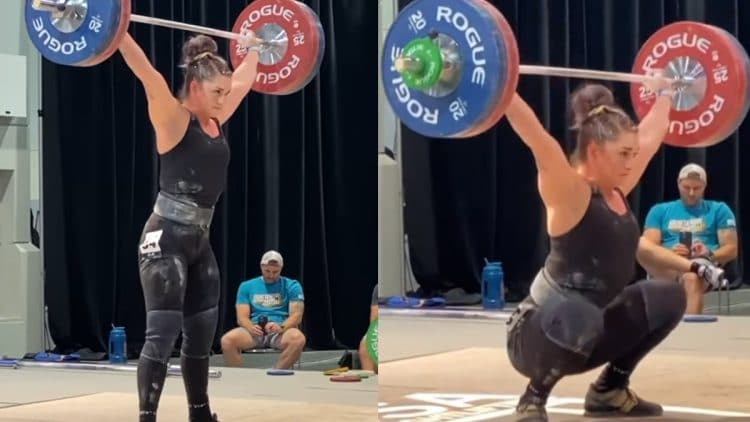 The 2022 USA Weightlifting (USAW) National Championships Week, which was held from June 25 to July 03, 2022, in Las Vegas, NV, has seen some amazing performances. Among the best was that of a junior weightlifter, Olivia Reeves. However, it is worth noting that Mattie Rogers has just completed some lifts, which are even more impressive than the rest. Mattie was very dominant in the 76-kilogram weight class and also claimed all three American Records in that division.

Mattie Rogers opened up her performance with a humongous 112-kilogram (246.9-pound) snatch. This beat the previous record, which Kate Vibert set at the Tokyo Olympics, by 1-kilogram (2.2-pound).

With these two results combined, Mattie Rogers also broke the Total American Record, since her score came out to 252 kilograms (555.6 pounds). Kate Vibert set the previous record of 249 kilograms (549 pounds) at the Tokyo Olympics.

You can watch all lifts here:

“Nice lil heavy day tune up as we start to ramp up for Pan Ams in about 3 weeks! Only took 3 of the 6 attempts to stick with our training plan with a quick hop over to the training hall after for finish up the day with a nice PR triple 🙂 Got to compete in the class my body is most comfy in & set all new American records for snatch, CJ and total. Happy with this check point!”

In the final slide of Mattie’s Instagram post, she shared a new 175-kilogram (385.8-pound) squat triple PR, which she performed after the competition was done.

Mattie Rogers only did three attempts out of the six that she was allowed to do. She performed two Clean & Jerks and one Snatch. Her bodyweight at the time of this competition was 75.69 kilograms (166.9 pounds). In addition, the second-place finisher in Mattie’s division trailed her by 37 kilograms (81.5 pounds).

At only 27 years old, Mattie Rogers became the greatest 76-kilogram weightlifter in the USA across all events. She previously competed in heavier weight classes (U87KG and U81KG), but this one seems the most perfect for her. Mattie already took part in the Tokyo Olympics, four World Championships (2015, 2017, 2018, 2019), and numerous Pan American championships.

Mattie is only concerned about the future, which also explains why she has not completed all six of her attempts. She will want to claim some big placings in the upcoming contests and qualify for the 2024 Paris Olympics.

Millions of people around the world look forward to the Summer Olympics that only comes around every four years. But...

The second episode of Brute Strength is here and the four elite female athletes who were chosen to compete against...