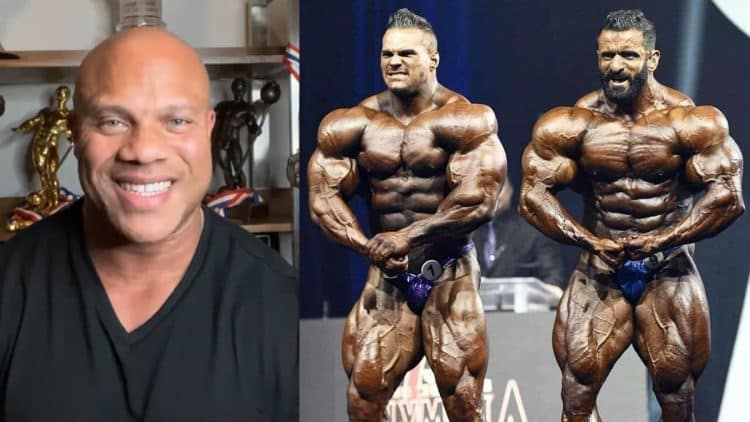 Legendary bodybuilder Phil Heath cemented his place in the history books as an all-time great by dominating the biggest stage in bodybuilding from 2011-2017 straight. In a recent interview with Dave Palumbo of RxMuscle, Heath identified the key to beating Big Ramy and backed Hadi Choopan as the favorite. He also praised Nick Walker for his improvements and believes he could shock some people at the upcoming 2022 Mr. Olympia.

Reigning two-time Olympia champion Mamdouh ‘Big Ramy’ Elssbiay is gearing up to defend the title this weekend. In 2020, Ramy defeated former champion Brandon Curry with his insane muscle mass and size to win his maiden Olympia contest. He added the second Sandow trophy under his belt last year by edging out Curry and fellow Open standout Hadi Choopan at the 2021 Olympia.

Big Ramy opened up about his progress two weeks out from the show in an interview with Phil Heath. Elssbiay revealed that he would likely step on the stage at about 295 pounds. He argued against focusing only on gaining size as it could damage his overall shape and symmetry.

IFBB head judge Steve Weinberger weighed in on Ramy’s chances of adding a third Olympia trophy to his glittering resume. He suggested Ramy looked too big last year and has made notable strides since the appearance. He called on the Egyptian mass monster to be cautious about over-dieting and getting too lean as it could hurt his shape.

Phil Heath reveals the key to beating Big Ramy at the 2022 Mr. Olympia

In a recent interview with Dave Palumbo of RxMuscle, Phil Heath identified the key to beating Big Ramy at the upcoming 2022 Mr. Olympia, scheduled for Dec. 15-18 at Planet Hollywood Resort & Casino in Las Vegas, Nevada.

He’s wider but I had rounder muscles so I wanted to make sure I was more 3D than him… But when Ramy gets in really good shape, it’s really f**king hard to beat.”

Iranian bodybuilder Hadi Choopan is one of the most consistent performers in the Men’s Open category. ‘The Persian Wolf’ has never placed below fourth since making his debut in 2019. He came close to the top spot at the 2021 Olympia but finished third behind runner-up Curry and champion Ramy. He will look to improve his placing and potentially win his first Olympia trophy.

Nick Walker is another top contender who has gained a lot of attention. He cracked the top five last year, placing fifth at the 2021 Olympia behind Hunter Labrada. Former Olympia victor Samir Bannout believes Walker is more ready than Hunter and will likely place ahead of him this year.

Phil Heath believes Hadi Choopan could be the athlete to dethrone Big Ramy.

He’s complete. What more do we want? He got third and I think they chose Brandon over him based on shape, not conditioning.

“It was just a shape contest for that. But we know that out of the two, Hadi has the more exponential growth than probably Brandon and Ramy because he was in 212 all those years. The guy trains like a freaking animal too and this guy is a beast.

Last year, I had him no less than second. This year, he can knock on the door. It’s always going to come down to the champion being off to get dethroned. But Hadi is definitely knocking on the door.”

Heath backed Nick Walker to make a statement at the Olympia

‘The Gift’ extended his support for Nick Walker, arguing that he could shock some people at the 2022 Mr. Olympia.

He’s going to basically have to mow down Hadi, Bonac, Brandon, Ramy, Andrew Jacked, and Iain Valliere… I think Nick has a really good opportunity to shock some people. It’s really going to be about how he nails it on Friday as opposed to Saturday.”

Last week, Phil Heath talked about the importance of Big Ramy to bring a better package than last year. Considering the intense competition, he argued that Choopan, Curry, Walker, or one of the other elite competitors could take the throne from Ramy if he left the door open.