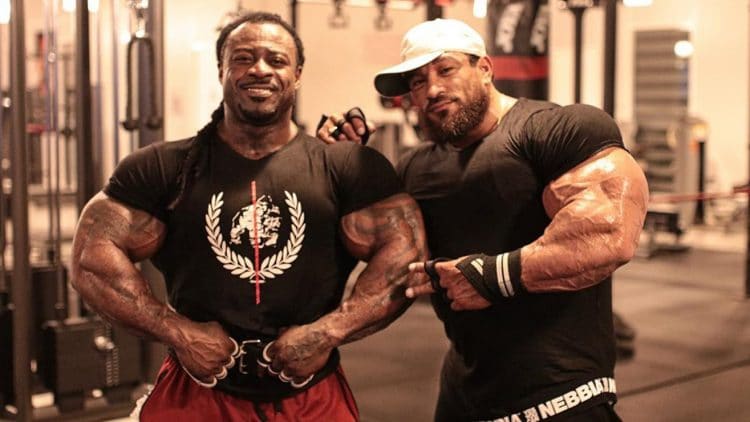 William “The Conquerer” Bonac recently took to Instagram to honor the man who impacted his life in such a positive way. But Roelly Winklaar was also blessed to have someone who introduced him to the sport.

Mondher introduced Roelly Winklaar to the sport in 2007, and then three years later William Bonac was initiated into what would eventually change his life for the better. Last year Bonac placed fourth at the Mr. Olympia competition while Winklaar came in third behind 7x champion Phil Heath.

But both posed for a picture together with their friend’s picture behind them. and Bonac’s message read…

“So here is a clear picture of Mondher B who introduce Roelly Winklaar in 2007 to the lifestyle of bodybuilding 3 years later he did the same with me. Helping me out with my posing after the gym was close.

He helped me out with a job as a fitnessinstructor & as a personal trainer in his gym, gave me supplement for half the price cause i couldnt afford it. I own a lot to this man who’s spirit is still among us day & night.

Thank you for being our mentor Mondher R.I.P My friend.”

Both William Bonac and Roelly Winklaar are preparing for the 2019 Mr. Olympia competition in September and although they’re friends, there will be no mercy shown when they step onto the biggest bodybuilding stage in the World.

Bonac posted a picture of them both posing next to each other during a chest session.

“With the Beast Roelly Winklaar having a crazy chest session in @sportenfitnesscenter with @bc_photographynl making Roelly out angle me👀!! You are fired Jeffrey 😂 damnnn this dude is #fromanotherplanet
Good luck with the last weeks of prep catch up soon big bro.”

It’s going to be an exciting Olympia this year, although the reigning champion Shawn Rhoden will be out after he was charged with rape a few weeks ago. But that case is still in progress as Rhoden recently entered a ‘Plea of Not Guilty’.

Phil Heath’s return is still uncertain but Bonac and Winklaar still have to deal with the 2019 Arnold Classic champion Brandon Curry who will be gunning for the title himself.

But we wish all the best to the amazing bodybuilders who will be competing at the 2019 Olympia. And hopefully, all of the recent negativity surrounding the sport will not overshadow the performances from these elite competitors.

The Arnold Sports Festival released the roster for the 2022 Arnold Classic bodybuilding competition. The event is taking place at...