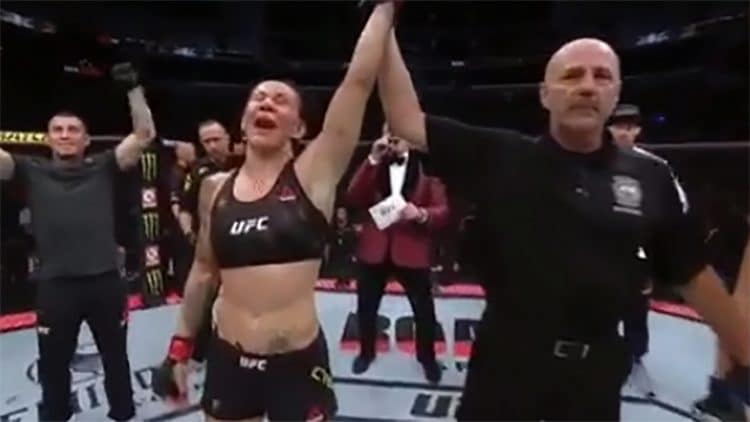 We saw an entertaining Featherweight contest between the ex-UFC 145-pound queen Cris Cyborg and the undefeated former vacant Invicta champ Felicia Spencer in the co-main event of the evening. The ref was Yves Lavigne.

In the first round, Cris kicked off aggressively, but Felicia stopped her with great clinching and kept her on the fence for some time. Most of the first frame Spencer was going forward, eating shots, and sticking like glue.  Cyborg delivered a few nasty counters, remained dominant and won this round.

The second round brought real Cris Cyborg to the fore. As soon as the round started, Cris started firing big shots on her opponent. Felicia even intentionally pulled guard but Cyborg punched her few times and let her up. Then we’ve seen a few more trades on both sides, but Cris was a simply better rival.

Cyborg kept doing the same thing in the third round. She delivered one nasty strike that hurt Felicia badly, but the former Invicta FC champ survived it and continued going forward. Spencer looked significantly slower, her strikes had no power at all. Cyborg dominated and won this round too.

She caught the kick 👀@FeeNom479 is showing her toughness round 2️⃣! #UFC240 pic.twitter.com/XdKk3geect

Back in the win column! #UFC240 pic.twitter.com/4IC1tHuFjT