The legendary rapper Method Man is reaping the benefits of his fitness regime. 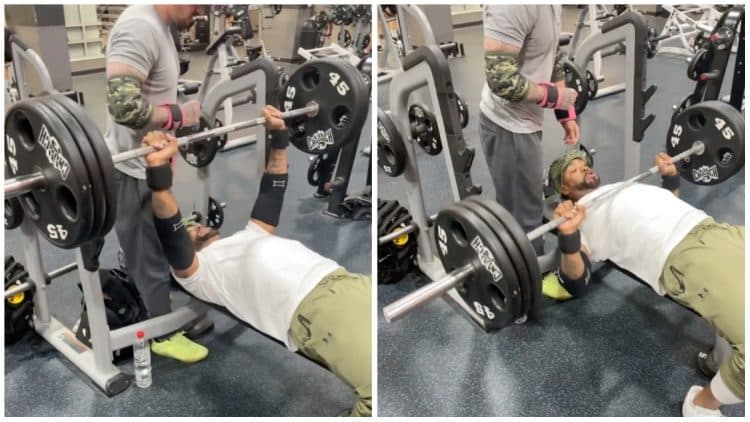 Method Man gained popularity for dropping bars on old-school beats. He joined forces with hip-hop standouts including RZA, Raekwon, and Ghostface Killah, to form the iconic East Coast collective. The group is widely regarded as one of the most influential acts in the genre. They helped promote the regional hip hop and hardcore hip hop styles across the nation.

While he still maintains a foothold in the rap game, Method Man has been making waves as a fitness influencer on social media. The 51-year-old inspires his followers by regularly sharing clips of his workouts promoting his sportswear fashion brand Tical Athletics.

In a recent video posted on his Instagram, Method Man can be seen performing a bench press of 315 pounds for five solid reps.

Method Man was listening to Ice Cube’s hit record ‘Pushin’ Weight’ featuring Mr. Short Khop to energize himself during the lift. It’s incredible to see Smith defy his age by performing a workout like this. He did each rep with clean form. While he did appear to struggle with the last rep, it will only motivate his followers as they see him pushing through a tough challenge.

It’s not just his pecs that he likes to go heavy on. In a previous video, he took to the squat rack to lift 315 pounds. Leg day can be very enduring for some people who look to avoid it altogether. However, he was looking to motivate his followers as he wrote “We don’t skip leg day!!” In another motivational clip, Smith Jr. was seen blasting a 100-pound dumbbell in each hand on the incline bench press for 12 reps.

Smith Jr. shows off his insane build in regular physique updates. Usually, he performs heavy workouts that seem to be geared towards powerlifters as opposed to traditional bodybuilders. He is consistent in his fitness journey too as he recorded a massive deadlift PR last year, and has shown no signs of slowing down.

How To Do The Knee To Chest Stretch – Muscles Worked, Benefits, and Alternatives