Eight-time Mr. Olympia Ronnie Coleman trains with fitness influencer Jesse James West: 'as long as you can lift it, it's light weight' 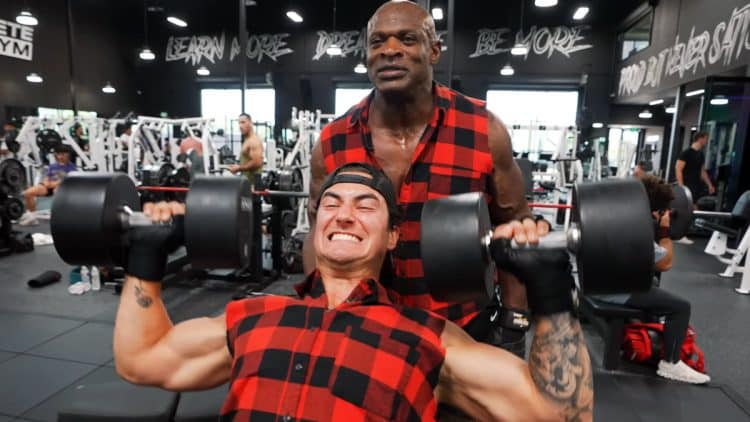 Bodybuilding legend Ronnie Coleman reached the top of the sport with an unwavering dedication to improvement and a relentless work ethic. In a recent video, Coleman joined fitness influencer Jesse James West and walked him through a series of exercises that he used during his time in competition.

Ronnie Coleman, an eight-time Mr. Olympia champion (1998-2005), is tied for winning the most Sandow trophies ever, next to Lee Haney, who also managed to earn eight titles throughout his illustrious career. As an active competitor, Coleman brought the size game to a whole new level. His shocking muscularity and definition made him incredibly difficult to stand against on stage.

During his Olympia reign, Coleman inspired the next generation of talent. Four-time Mr. Olympia Jay Cutler admits that Coleman’s intense high-volume training efforts influenced how he approached each of his bodybuilding seasons. In 2006, Cutler dethroned “The King” at Olympia, ending one of the most dominant eras the sport has ever witnessed.

Cutler admitted that he had to ‘separate himself from society’ in order to hang with Coleman in his prime. Coleman left no stone unturned inside the gym, and according to Cutler, he trained day or night in order to cement himself as one of the best bodybuilders in the world. Coleman has stepped away from the sport, though remains an important figure in the community given his long-standing success.

In retirement, Coleman collaborates with various fitness influencers and athletes, spreading inspiring messages about how he managed to stay on top of a sport for over eight years. As of late, the legend linked up with Jesse James West, a social media star who is well-known in the fitness industry for his shredded build and funny content.

In a recent YouTube video, Jesse James West and Ronnie Coleman get to work with a series of exercises.

“We got the man, the myth, the legend, eight-time Mr. Olympia. I’m going to hit some heavy squats. I need some ‘yeah buddy’s’, I need the motivation. Then, we’re going to get a nice upper body pump.” James West said.

After adding more weight, James West continued with another set for 15 reps. Coleman added that his favorite exercise for building legs is squats. During his prime, Coleman explained that he would rather work out alone than in the company of other people.

The eight-time Mr. Olympia decided to hit some reps on the Hammer Strength incline bench press machine next. James also practiced on this machine before they moved to the next exercise.

“We were friends. We worked out together. Coleman shared. “When we were on stage, we were competing.”

James and Coleman practiced seated dumbbell curls and the former Mr. Olympia offered what he believes is the most important tip for growing muscle.

“Was it true you were .33 percent body fat?” James West asked.

“Yup. I had done it at Cooper Clinic.” Ronnie told James West.

Before the next exercise, Coleman told James West that his biggest accomplishment in life was winning his first Mr. Olympia contest in 1998.

For their final exercise, Coleman guided James West through deadlifts. James West asked Coleman if sumo deadlifts count and the decorated legend said, ‘yeah, we’ll count that. Yeah buddy. As long as you’re picking it up, it counts!’

In between sets, James asked Coleman for his best piece of advice when it comes to improving on deadlifts.

“Pull with your hamstrings. Coleman explained. When I was 22, I did 725-pounds easy. Everybody wants to be a bodybuilder, but don’t no one want to lift no heavy ass weight.”

After performing a set for ten reps, James and Coleman call it a day. At 58 years old, Coleman is an inspiration to all, given the sacrifices he’s made in the sport to ascend to the top. The legend revealed that he’s undergone over ten back surgeries throughout his career. Unfortunately, he lost the ability to walk unassisted as a result of those operations.

Despite the adversity, Coleman hasn’t slowed down and trains hard to this day. He lives by his ‘no excuse’ attitude and still hits leg day. Earlier this month, the eight-time Olympia legend used his arms as legs on the incumbent bike after his feet were too numb to continue.

For Jesse James West, training alongside a decorated pro like Coleman motivated him to push the limits in the gym. Following the training session with James West, it’s evident Coleman still loves the sport and training to the best of his ability.