Michael B. Jordan Shows Off Jacked Arms In A New Workout Video Ahead Of Creed 3

MIchael B. Jordan is working with trainer Corey Calliet to get in shape for his role in the movie 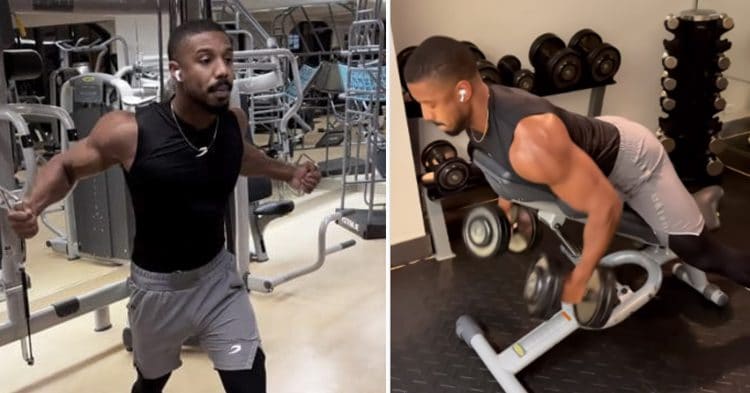 American actor Michael B. Jordan is set to play boxer Adonis ‘Donnie’ Creed in the third installment of the Sports drama franchise Creed. His training to reprise the role is in full swing and Jordan looks massive and ready to go.

Michael B. Jordan’s personal trainer Corey Calliet recently shared Jordan’s workout video Montage on his own Instagram account. The 34-year-old actor is seen performing inclined dumbbell rows, cable flies, and dumbbell curls in the video montage. While he looks in great shape overall, Michael B. Jordan’s biceps and shoulders immediately grab attention. Calliet, who helped Michael B. Jordan gain mass for his role in the movie Black Panther, is helping him lean down for Creed III.

“Director by day building a body at night! In order to achieve the great reward a certain amount of consistency must be attained… @michaelbjordan,” Corey Calliet wrote in the caption to his post.

Apart from playing the main protagonist, Michael B. Jordan will also sit in the director’s chair for Creed III. The caption to Corey Calliet’s post refers to Jordan’s commitment and consistent efforts towards both aspects of this project.

Michael B. Jordan has a great fitness level irrespective of the roles he plays. Corey Calliet has already stated that the training program is aimed at developing the particular muscles that can help Creed look more like a professional boxer. He also assured that Michael B. Jordan will look better than he looked in the last movie.

Corey Calliet has trained Michael B. Jordan since 2015

Corey Calliet has trained Michael B. Jordan for almost seven years and helped him prepare for Creed, Creed II as well as Black Panther. Calliet states that his goal with Michael B. Jordan is to make him look progressively better in each movie.

Both men have established an excellent rapport and work towards a common goal with perfectly aligned thought processes. Testimony to the fact is that Calliet helped Jordan bulk up to play Killmonger in Black Panther and then used that bulk to shred him down to play the role of a light heavyweight boxer in Creed II.

Instead of focusing on actual sparring, Calliet made Jordan work more with mitts sessions and heavy bag. Calliet had formulated Michael B. Jordan’s workout plan for Jordan to look better on-screen and also did a lot of work on fight choreography. Creed III will hit the theaters in 2022. It will be interesting to see how Michael B. Jordan’s physique will be transformed for an even better on-screen appearance.

The Pectoral Split – Two Workouts Per Week for Perfect Pecs

Chris Hemsworth has put himself through some of the most impressive body transformations during his film career. The Australian actor...

Fans around the world look up to Dwayne Johnson’s larger-than-life persona and unparalleled work ethic for motivation. Johnson is also...

Michael B. Jordan’s ‘Creed’ Diet & Workout Program to Get You Ripped

In a boxing match, the fight starts well before the fighters step inside the ring. Boxing is as much psychological...

With one of the craziest physiques you will ever see, Cindy Landolt is a majorly gifted athlete. She has used...