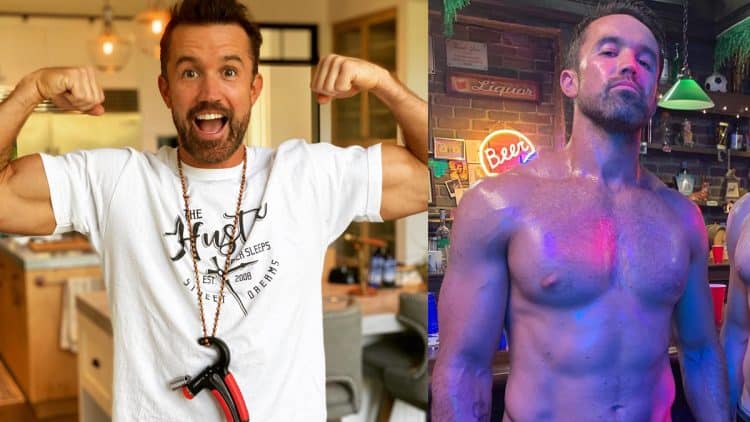 Rob McElhenney is an American actor who turned heads with a stunning transformation. Rob packed on 60 pounds of fat for his role as Mac on the TV sitcom It’s Always Sunny in Philadelphia but sported a completely different look a few seasons later. He lost his bulging belly to get jacked.

In this article, we go over the training and diet that Rob followed to bring about this stunning transformation.

Rob McElhenney was born on April 14, 1977. Both his parents are Irish and he was raised as a Catholic. His parents divorced when Rob was eight years old. Rob and his two younger brothers were subsequently raised by his father, who later remarried.

Rob attended St. Joseph’s Preparatory School in Philadelphia. His acting career began with the 1977 movie
The Devil’s Own. His role, however, ended up being cut out of the final edited version of the movie. He then had small parts in a succession of movies.

Rob moved to Los Angeles when he was 25. While waiting tables at a restaurant, he developed an idea for a sitcom. He managed to film a pilot on a two hundred dollar budget. It got such good reception that a number of production companies made him offers.

Rob decided to sign with FX. The series that resulted was called It’s Always Sunny in Philadelphia. He threw himself into the series, taking on the roles of writer, producer, and actor. Despite his busy schedule, he has also found time to make appearances on other shows, including Lost and Game of Thrones.

In 2020, Rob co-created the Apple TV series Mythic Quest. He also plays a lead character on this show.

Rob McElhenney is married to actress Kaitlan Olsen. They have two sons.

Rob has undergone a number of physical transformations as part of the humor in It’s Always Sunny in Philadelphia. Between the sixth and seventh seasons of the show, he put on 60 pounds of body weight and grew a beard. At the end of season seven, McElhenney lost 23 pounds in a single month. Then, prior to season 13, he underwent an even more dramatic transformation, becoming far more muscular, fit, and athletic.

Rob’s nutrition program is quite unique because he intentionally set out to gain 60 pounds for comedic purposes. To pack on that weight, he consumed four 1,000-calorie meals each day. In keeping with his hacker’s nickname Big Mac, he relied on McDonald’s quite a lot to get all those calories into his body.

Rob found that the key to losing his excess weight was to focus on eating fewer calories every day than he was burning. He followed a high protein, low-medium carbohydrate, and low-fat diet during his cutting phase.

Rob’s fat loss diet was built around the following foods:

Rob cut back his sugar, alcohol, fast food, and trans fat consumption during his transformation.

Here is what a typical day’s worth of eating to lose weight looked like for Rob:

Rob McElhenney is a comedian. So, it’s no surprise he put a humorous slant on what it took to get in great shape. Here is what he said on Instagram:

“Look, it’s not that hard. All you need to do is lift weights six days a week, stop drinking alcohol, don’t eat anything after 7 pm, don’t eat any carbs or sugar at all, in fact just don’t eat anything you like, get the personal trainer from Magic Mike, sleep nine hours a night, run three miles a day, and have a studio pay for the whole thing over a six to seven-month span. I don’t know why everyone’s not doing this. It’s a super realistic lifestyle and an appropriate body image to compare oneself to.”

From Rob’s post, we get the following key points:

On Rob’s six-day split, he does the push/pull /legs sequence between Monday and Wednesday and then repeats it from Thursday through Saturday. Rob uses different exercises in the second round of his training regimen.

Each of Rob’s workouts consists of seven exercises. Sets range between three and five, with a rep range between 10 and 50. He loves to train to failure with a weight that will see him pump out between 7 and 12 reps. As you’ll see from his workout program, he really enjoys performing super high reps. He frequently goes up to 50 reps per set on his last couple of exercises to achieve a muscle-ripping pump in the target muscle group.

Given below is McElhenney’s training regimen:

Rob uses several supplements to improve his focus during workouts and to deliver greater strength and energy. Here’s what he uses:

Over the past decade, Rob McElhenney has demonstrated the ability to exert an amazing level of control over his body. He has gone from purposefully getting fat to play Big Mac on
It’s Always Sunny in Philadelphia to become super lean and muscular to portray Lean Mac on the same show.

In this article, we have given an overview of how Rob achieved both of these physical conditions. While we don’t recommend you follow Rob’s lead in packing on 60 pounds of body weight, we suggest giving his six-day per week push/pull/legs workout routine a try to see how it works for you.