Discover the training and diet, both in water and gym, that preceded Michale Phelp’s stunning performance at the 2008 Olympic Games. 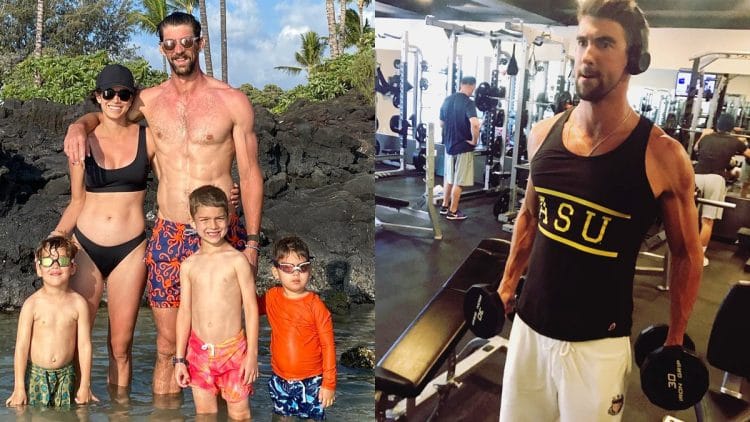 Michael Phelps stunned the fans with his physical abilities when he burst onto the Olympic stage in 2004 and gobbled up half a dozen gold and two bronze medals.

While Phelps is, without a doubt, a genetic freak with a body naturally suited to the pool, his success is the result of a lifetime of hard work.

Countless hours in the pool and the gym prepared Phelps to become the winningest athlete in Olympic history — 28 total medals. In this article, we break down Michael Phelps’ training and diet.

Michael Fred Phelps II was born on June 30th, 1985 in Baltimore, Maryland. He is the youngest of the three children of middle school principal Debbie Phelps and retired Maryland State Trooper, Micheal Fred Phelps. In high school and college, Michael played football and tried out for the Washington Redskins.

In 1994, when he was nine years old, Phelps’ parents divorced. He later revealed that the divorce was extremely traumatic for him and his siblings. He had begun swimming two years earlier.

“The only reason I ever got in the water was my mom wanted me to just learn how to swim. My sisters and myself fell in love with the sport, and we decided to swim.”

Phelps was diagnosed with ADD in the sixth grade. At age 10, he achieved a national record in the 100-meter butterfly for his age group. He then began to train at the North Baltimore Aquatic Club under coach Bob Bowman.

Phelps has stated that Bowman was like a drill sergeant, insisting on discipline and regimentation. Yet, he credits his training under Bowman as being pivotal to his future success.

“Training with Bob is the smartest thing I’ve ever done … I’m not going to swim for anyone else.”

Phelps was selected for the 2000 US Olympic team at 15 years old, becoming the youngest male to make the US Olympic swim team since 1932. He did not win a medal at the 2000 Olympic Games but finished a respectable fifth in the 200-meter butterfly.

The following year, at the 2001 World Aquatic Championships, Phelps broke the world record in the 200-meter butterfly, becoming the youngest male ever to set a world swimming record.

Phelps won the first of his 23 Olympic gold medals at Athens in 2004 in the 400-meter individual medley, setting a world record time of 4:08:26. At that Games, he went on to win five more golds and two bronzes.

Four years later, at the 2008 Olympic Games in Beijing, he won an incredible eight gold medals, breaking Mark Spitz’s record of seven golds, set at the 1972 Games in Munich. After Phelps broke his record, Spitz commented —

At the 2012 Summer Olympics in London, Phelps added to his gold medal tally, winning another four golds, along with two silvers. After the Games he announced his retirement, telling the world —

“I’m done. I’m finished. I’m retired. I’m done. No more,” later adding “I just wanted to be done with swimming and didn’t want anything to do with the sport anymore.”

But he wasn’t done. He came out of retirement in May 2014 to win the 100-meter butterfly event at the Arena Grand Prix in Charlotte, North Carolina. He was reported to have said that his motivation for the comeback was the recent poor performance of the US men’s swim team. By now, Phelps’ relationship with coach Bob Bowman had deteriorated. Bowman did not buy into the comeback, leading Phelps to tell him that —

At the 2016 Olympic Games in Rio de Janeiro, Phelps continued to add to his medal collection. He won five more golds and another silver. All of this was achieved at 31 years of age, well beyond the prime for a world-class swimmer.

Phelps finally retired after the Rio Olympics. Along with his 23 gold medals, he had collected 20 Guinness world records and established himself as the greatest swimmer of all time.

Michael Phelps’ nutrition program for the 2008 Olympics, where he hauled in eight golds, hit the headlines when it was revealed that he was consuming 10,000 calories per day. That may seem unbelievable, but the guy was doing a massive amount of training (six hours each day) and so needed all of those calories to fuel his way through it all.

At the time. Phelps commented —

Even while he was competing, Phelps would maintain his ridiculously high-calorie level. This ensured that he was never glycogen-depleted and that he was always getting the carbs he needed to perform at peak level.

Let’s break down how the Baltimore Bullet ate his way to claiming more golds at an Olympics than anyone in history.

While it was reported that Phelps would go up to 12,000 calories per day, he personally nixed that rumor when he wrote the following in his autobiography No Limits —

He also said that he never cooks, adding the following in a 2010 NBC TV interview —

“I was told that I was supposed to eat between eight and 10,000 calories a day. I just sort of try to cram whatever I can into my body. It’s pretty much whatever I feel like eating, I’m going to eat.”

Of course, most people who followed the type of diet outlined above would end up getting fat. Yet, Phelps maintained an average body fat level of just eight percent, thanks to all of that time spent in the pool and the gym.

During his swimming career, Phelps would swim at least 80,000 meters every week. To achieve that target he would be in the pool twice a day, for a total of about five hours in the water daily. He is known for listening to music with his waterproof headphones while in the pool.

Phelps swims 13 kilometers every day. He also spends about an hour in the gym three days per week, focusing on functional fitness training.

This is the swim routine that Phelps used prior to breaking all sorts of records at the 2008 Olympic Games.

Michel Phelps’ warm-up for his mammoth workout sessions looks like a full-fledged workout in itself for most people. He split it into four sections which included —

Section Two (after a 20-minute break)

The many hours that Micahel Phelps spent on the gym floor were absolutely crucial to his success. He worked out three times per week in his build-up to the 2008 Olympic Games.

Phelps was more interested in developing functional strength and muscular endurance than building muscle size. As a result, he kept the weight moderate and the reps relatively high.

Phelps did a lot of dumbbell training. Here is a typical upper body workout that he used to hit the deltoids —

Phelps is a fan of weighted bodyweight exercises, such as the pull-up and push-up. In each workout, he would pump out three sets to failure on weighted pull-ups, achieving between seven and 10 reps while wearing a 20-pound weighted vest. He would also do three sets of push-ups to failure, getting about 17-20 reps per set.

Phelps is well-known for his wide lats. Here is the back workout that he used to help achieve it. (super-setted with his chest routine) —

Michael Phelps was able to combine superior genetics with a lifetime of intense training and practice to become the greatest swimmer the world has ever seen. His unique combination of super high calories, marathon pool sessions, and strategic weight training is what propelled him to the top.

You and I may not have the inherent gifts to make a world champion Olympic athlete, but we can all certainly learn from Michael Phelps’s work ethic to become the best version of ourselves.

The Best Workout Finishers for Every Muscle Group