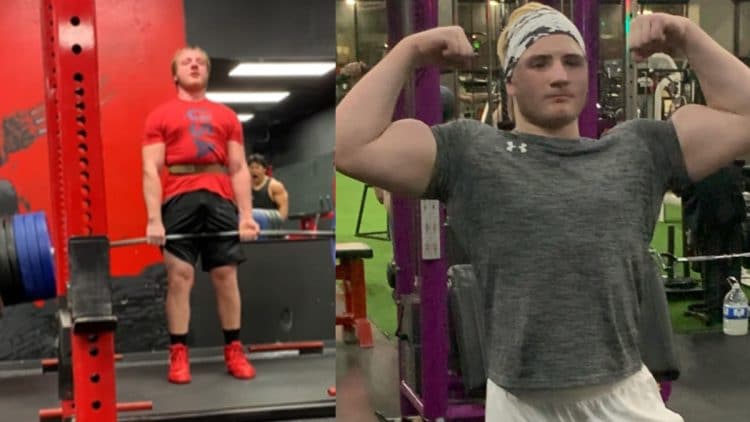 Ever since the start of his teen years, the 15-year-old Morgan Nicholls has been impressing everyone with his absurd strength. His squatting prowess even impressed the likes of Ronnie Coleman, and he is getting even better. As the years’ pass, Morgan is getting even more powerful, but his specific training plays a major factor in the significant strength gain. In an Instagram video posted by Nicholls on April 25th, he can be seen claiming a massive 605 lbs (274.5 kg) deadlift PR.

Morgan Nicholls’ deadlift is considered raw by all standards, as he only used a lifting belt to aid him in the pull. His deadlifting style combines a conventional stance and a mixed grip. Although Morgan’s new PR was not done with ease, at no point did it look like he would fail the lift. Morgan’s goal was to pull 600 lbs before July of this year, but he even did it before May.

“Everything feeling good took 605 for a ride for a new PR.”

They say that the apple doesn’t fall far from the tree, and Morgan Nicholls is the perfect example of that, as his parents are icons in the sport of Bodybuilding. His father, Chad Nicholls, is a well-known bodybuilding coach and nutritionist. Known for working with 8x Mr. Olympia Ronnie Coleman, the current Mr. Olympia Mamdouh “Big Ramy” Elssbiay, and boxing icon Mike Tyson. Morgan’s mother, Kim Chizevsky-Nicholls, on the other hand, has won four Ms. Olympia titles (from the years 1996, 1997, 1998, and 1999). She was also inducted into the IFBB Hall of Fame.

Domenic, Morgan’s 18-year-old brother, is hoping to compete in bodybuilding soon. Morgan Nicholls will have the best chance of succeeding when he takes up competitive powerlifting next, especially since he does so well in the gym.

Despite both of Morgan Nicholls’ parents being passionate about bodybuilding, he took a different approach and now takes part in sports which focus more on the strength output. Morgan is currently an American football player, but he has taken part in one sanctioned powerlifting competition. That was the 2020 SPF GP Summer Smash, and Morgan was just 13-years-old at the time.

And according to the caption of Morgan Nicholls’ Instagram account, he has squatted 545 lbs, bench pressed 455 lbs, and now deadlifted 605 lbs. These would be incredible stats for anyone, let alone a 15-year-old. Everyone is just waiting for him to take part in an actual powerlifting event and crush some World Records.