Oleksii Novikov wrapped up a very busy year with a 2022 Rogue Invitational title. 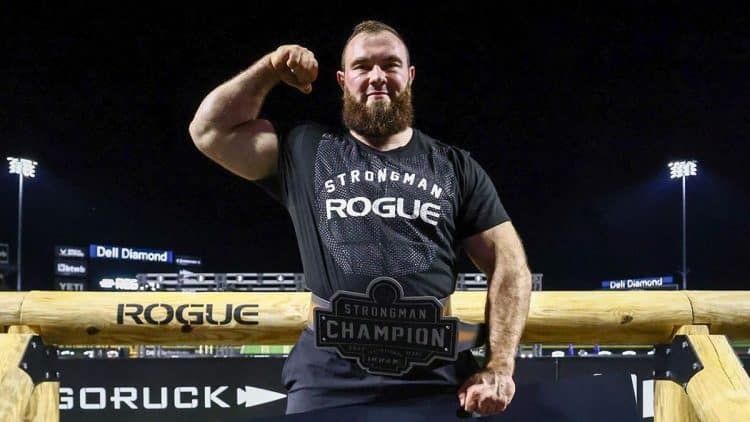 At the beginning of 2022, Oleksii Novikov shared petitions and tried to help his country and its citizens after they got invaded by Russia. At that exact moment, it seemed that Oleksii’s Strongman career would be swept under the rug, but things turned out radically different. Fueled by passion, Oleksii had one of the busiest years of his career, and he now wrapped it up with a victory at the 2022 Rogue Invitational.

The 2022 Rogue Invitational was a two-day competition which took place on October 28-29, at Dell Diamond in Austin, Texas. It consisted of six events and featured 10 of the world’s strongest athletes. However, despite all of the efforts, no one was able to stop Oleksii Novikov from claiming another title.

Coming into the competition, it was clear that Oleksii Novikov and the defending champion, Martins Licis, would be each other’s biggest rivals. This was immediately displayed in the first event as these two guys tied for third place with 9 repetitions on the deadlift each. However, Oleksii developed a lead on the following event, having won the Dumbbell Press for reps. The advantage he got over Licis never evaporated, but instead just got bigger.

The next event was on day two, and Oleksii continued where he left off with another top-three finish.

While he did not get a top 3 finish on the fifth event, Oleksii Novikov managed to further improve his lead over the only people who were in a position to catch him. Trey Mitchell then placed all the pressure on Oleksii Novikov in the sixth event, but the Ukrainian representative showed what champions are made of.

Oleksii Novikov took part in eight International Strongman competitions this year and only failed to stand on the podium in one of them. Furthermore, four of those were victories.

Oleksii Novikov had two more notable moments this year. The first one was when he set a new 246-kg (542.3-lb) Flintstone Barbell World Record at the 2022 WSM. The second one happened at the 2022 Shaw Classic when Oleksii set a 1,210-lb Hummer Tire Deadlift World Record.

Oleksii Novikov won the 2022 Rogue Invitational, which was only the second edition of the Strongman competition. Martins Licis won last year’s inaugural competition.

Currently, it is unknown what lies ahead for Oleksii Novikov, but at only 26 years of age, he has the potential to become one of the greatest strongmen in history.

8 Dumbbell Lat Exercises for a Wide and Thick Back