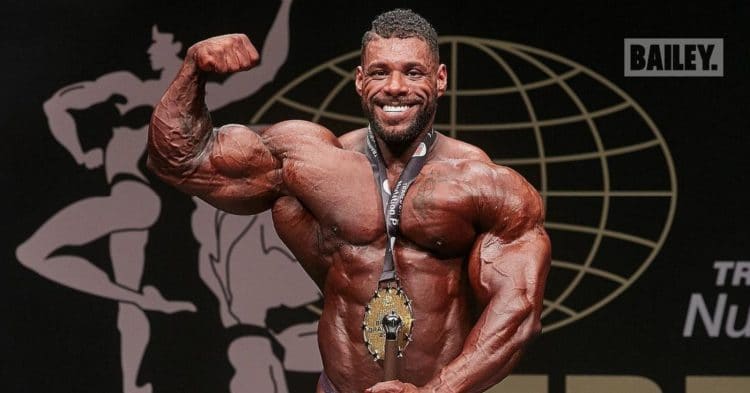 Back in 2019, Nathan De Asha was convicted of distributing steroids through the postal service. Now for the first time since that incident, he goes into detail to give his perspective on what went down.

There was a time that De Asha was looked at as one of the most promising bodybuilders in the world. The Englishman had a ton of potential, and still does to a certain extent, leaving fans to wonder how far he will be able to make it.

However things took an unfortunate turn for the young prospect, after he as involved in scandal. Back in 2019, Nathan was convicted of distributing steroids through the mail, getting sentenced to probation.

The judge referred to Nathan as a disgrace to the sport that day, and many fans echoed those sentiments. While he has competed since then, he has not exactly been able to regain the momentum he previously had.

Speaking in a recent interview, Nathan De Asha decided to open up about his use of steroids, and what led to his arrest and conviction.

Getting Started On Gear

Even before the beginning of his endeavors as a bodybuilder, Nathan De Asha used performance enhancers. He explained that he never quite saw anything wrong with it, when he was offered steroids by a friend of his.

“I didn’t give a s—t,” De Asha said, regarding using steroids. “I was playing football, and I was told I needed to be bigger to get a pro contract.

“So I (asked) my cousin Daniel, he’s really into Arnold and mad into bodybuilding. He said, ‘Use this thing, Sustanon.'”

Nathan De Asha goes on to explain being scared at first, but that he used Sustanon, which is a form of testosterone replacement, for six weeks. Apparently, the results were mind blowing.

“I’d done 1 mil of Sustanon for six weeks. I stayed in the house, no one seen me,” De Asha explained.

“Then I went out, I went to a shop on the corner and everyone was like ‘Nathan, you been to jail? You’ve put about 20 or 30 pounds on.’

“I hadn’t been to jail, but I just lied. I said ‘I just done seven months,’ totally lied. I didn’t want to tell them I was on the juice.”

From there, De Asha said that he began to really like using steroids, and found new methods and types of gear to use. He slowly became more and more involved with using performance enhancers.

How Nathan De Asha Got Arrested

After moving to the United States and competing at the New York Pro, things seemed to be looking up for Nathan De Asha. Then things turned south in 2017, after he got caught using the mail service to distribute steroids.

The way Nathan explains it, he sent some samples to someone he hardly knew. He was offering the guy advice on gear, and then said he was willing to send the guy samples, if he had any left over.

“That was in July, the guy then gets raided in December of 2017,” De Asha explained.

“In December, they find a box of Clomid with my name on it. They find like 50,000 cash, a money counting machine, and I think like nine ounces of cocaine in the box.

“He gets charged with it, I hear nothing from it. Then six months later the police Facebook me and say can you come for an interview. I’m like sure, no problem.”

From there, Nathan De Asha explains that things were going fine at first. However when the person who got raided by authorities kept pleading not guilty, he says that the police tried to out charges against him too.

He says that they tried to stick him with the drugs and money charges, but that they get those thrown out. Yet even though it had been months since he sent the main samples, he had to plead guilty to those charges.

Apparently after speaking with his lawyer, De Asha came to the realization that he would get the book thrown at him if he fought the case, perhaps because of skin color. So he pled guilty and took the punishment.

Nathan reveals that this court case has led to difficulties in him getting his Visa for the United States. This, coupled with the global pandemic has kept him on the sidelines since 2019.

Nathan De Asha says he is in the process of getting things cleared up for a return to the stage this year. Hopefully he gets that chance, and can work to redeem himself in the eyes of the fans.