Thor is the all-time world record holder in the deadlift having lifted 501kg/1105 lbs. Keep reading to learn from the absolute best. 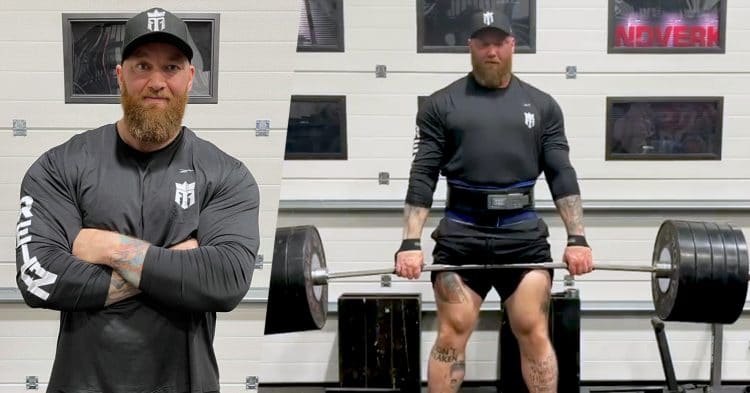 His biggest focus right now is training for the boxing bout against Hall later this year to settle their intense beef. Bjornsson retired from Strongman last year to focus on his health, family, knocking Hall’s head off and other endeavors too. 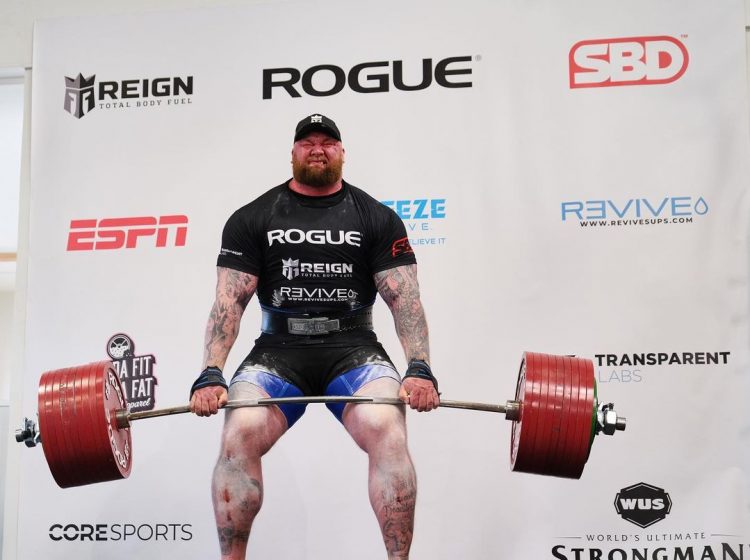 The 32-year old is still training like an animal and has lost over 100 pounds going from 204kg/450lbs+ lbs to currently around 156 kg/343 lbs. He’s certainly much slimmer and quicker which he’ll need to be if he’s to keep up with Hall in the ring.

In the meantime, the deadlift world record holder was kind enough to upload a tutorial on how to deadlift that includes some tips and tricks so you definitely don’t want to miss this. After all, it’s not every day you get this much information from the best of the best!

There’s no better total-body movement than the deadlift, and more specifically, the barbell deadlift. It works all muscles from head to toe and allows you to lift the most weight that your body is capable of pulling up off the ground.

Plus, it’s a great teacher of maintaining good lifting form and there are so many amazing variations.

While it can have a lot of injury risk; when done properly, it’s a safe exercise that has absolutely incredible benefits and carries over to other movements, everyday activities, and sports. And if you’re a powerlifter or Strongman competitor, you have to be strong in this lift!

Read: Build Strength and Size With The 15 Best Deadlift Variations

Hafthor’s Deadlift Tips and Tricks For A Massive Deadlift

At first, The 6’9 giant teased viewers saying that they’d be able to beat his record in a few months after learning his technique. But he quickly reminded everyone that it ain’t ever happening.

As you probably guessed, Bjornsson always places his fingers in the same position on the bar when he sets up for the deadlift.

He places his ring or fourth fingers on the barbell rings which helps him to grip the same part of the bar each time.

You probably like to grip the bar a certain way whether you’re doing deadlifts, rows, or the bench press and you know how convenient it is. Now, just because he does it this way, it doesn’t mean everyone will. Lifting is many times an individual thing that can vary based on many factors.

Thor proceeded to knock out a few reps and then explained the importance of foot placement. Without proper foot position, you can forget about maximizing your potential in the deadlift, and you improve the risk of injury.

Thor stands under the bar with his feet slightly wider than shoulder-width apart. He feels most capable in this position but he does recommend at least a shoulder-width stance for most people learning or trying to maximize their proficiency in this lift.

He also recommends keeping the feet pointed slightly outward and this is actually a common way to place your feet. The reason being is that it allows you to easier move your knees back as the bar moves up the body and past the knees.

Bjornsson also uses lifting straps and he demonstrated how to wrap them around the bar to get a good grip.

We recommend checking our review of the best lifting straps to not only grab yourself a quality pair but to also learn how to use them effectively.

Straps are very beneficial for lifting more weight even if your grip isn’t strong enough to grip the bar.

Bjornsson checked to see if his hands were even on the bar and then he, again, performed a few more reps with more plates on each side this time as he progressed his deadlift weight throughout the session.

In between, he challenged himself to see if he could jump rope for a minute straight without stopping, although it’s part of his boxing training. It seems like all of the intense boxing training, cardio, and weight loss has been paying off.

He hopped up on the scale and it showed him at a weight of 157kg. “That’s so light,” he said after stepping down. Well, coming from where he was, sure. But not for the average human!

They even joked that he’s lost as much weight as a small person.

If you’re going to be lifting 501+kg in a few months, you’ll need a good belt to support your efforts. All joking aside, a lifting belt helps to keep your core rigid and compressed; an essential component of safely and effectively pulling big weights off the floor.

Of course, you don’t always need a belt, especially if you’re not using maximum poundages. This ensures you build good natural strength and don’t rely too much on gear to enhance your performance, and even Thor acknowledged this.

He likes to use a belt to protect his lower back and also explained he’s never had any back problems, also because he uses good lifting technique.

Related article: 3 Reasons Your Back Hurts After Performing Deadlifts

But apparently, when he first started, it wasn’t so great. But turns out, he’s not shabby now.

As you probably guessed, he stacked on another few plates and did two more deadlifts!

“People sometimes forget to use the colors“… Thor was obviously very bothered by the fact that he’s seen people online neglect to use collars when they are deadlifting.

“The only reason why I feel it’s good to use the collars always is that sometimes people do mistakes and their grip is a little bit uneven and the weight starts to slide off in the middle of a set.”

He went on to explain that this many times causes a biceps tear (you definitely don’t want one of those).

There goes 5 plates on each side and two more reps for Thor. How high will he go?

This is a very interesting tip and a possible mistake that many make when deadlifting.

“Whenever you’re about to pull the bar from the floor and your shoulders are over the bar, you want to stop, you want to correct yourself.”

We think he’s referring to the shoulders being a little in front or forward past the bar.

Thor prefers to roll the bar toward him to help him get into the perfect position for the pull. This means to get his hips down, back proper, and shoulders a little behind the bar. Now, he did explain that it’s not for everyone and you don’t have to do it if you don’t like it.

But regarding shoulders above the bar…

“If your shoulders are above the bar, you won’t be able to lift as much and your technique will be awful.”

So he demonstrated what he was talking about and showed that if the shoulders are too far forward over the bar, his butt is way too high and he wouldn’t be able to lift the weight.

He then showed how it’s done but not before “shaking his ass a little bit” before he moves to the next step.

The next part was to roll the bar in, push his butt down, squeeze his shoulder blades together and keep his chest up. Now he’s ready for takeoff!

Thor said that he doesn’t push upwards as he deadlifts though, but rather he almost focuses on pushing back as he stands up out of this position.

“That’s how you deadlift.”

He apparently hasn’t deadlifted in three months, which makes sense because he’s been focusing on beating up Eddie Hall at the end of 2021.

If you’re serious about breaking the world record, then you have to be willing to do whatever it takes. If that means farting to ensure you don’t s**t yourself during the deadlift, then, by all means, let it rip (it may even give you a little boost too)!

Alright, so now it was time for Thor to show what it looks like when you combine all of the key ingredients of a safe and effective deadlift.

He wasn’t done quite yet. Breathing is extremely important whether you’re lifting 10 lbs or 1,000 lbs.

Thir breathes all of the oxygen into his lungs before the pull, and then he completes the lift. He also focuses on breathing in between his sets and kept reiterating its importance.

“You need to get the oxygen in your muscles.”

Also read: 6 Reasons Which Can Cause A Lifter To Pass Out After Heavy Deadlifts

That was the end of the tutorial and there was certainly a lot of great information. Hopefully, you learned something and now it’s time to go practice your deadlifts!

Watch the full episode below…