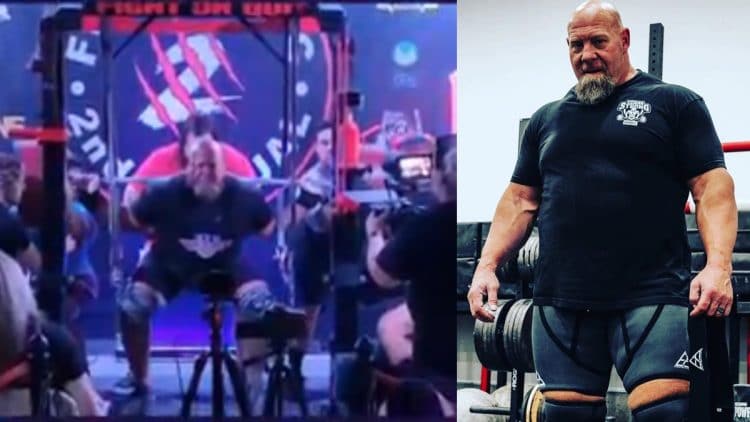 One of the most iconic Strongman athletes, Nick Best, is defying the aging process and still displaying some incredible lifts. Nick showcased this at the 2022 WRPF FQ Classic 2, which took place on May 1st, in Las Vegas, Nevada. We got to see Nick compete in the 140 kg weight class of the Masters (50-54 years old) age division. He put up one of his greatest lifetime performances by setting the new WRPF Squat & Deadlift Masters’ World Records.

Nick Best squatted 372.5 kg (821.5 lbs), but used knee wraps, which means his lift was not raw by powerlifting standards. However, his 337.5 kg (744 lbs) deadlift was raw. It is worth noting that only one year has passed since Nick Best tore his lat at the 2021 Kern US Open. In addition, only one week ago, Nick took a three-day role of the Head Judge at the 2022 Clash on the Coast Strongman competition. So with a bit more rest, Nick would have probably scored a new Total record as well.

There is not a lot of footage of Nick’s lifts, but you can watch his squat here:

Nick Best weighed in at 138.1 kg (304.2 lbs), significantly under the 140 kg limit for his weight class. He only failed his last attempt on the deadlift, but all of his squats and bench presses were successful. Nick Best now holds all 4 of the WRPF Masters World Records in the 140 kg weight class.

According to Open Powerlifting, Nick Best has also equaled the WRPF Masters Total World Record. He has previously totaled the same amount at the 2021 WRPF Kern US Open to claim the record.

Nick Best is no stranger to powerlifting meets, having taken part in sanctioned competitions since 1985. Since then, he has tallied 34 meets and won multiple National and State Championships.

Nick has also competed in 36 International Strongman shows. Most notably he took part in the World’s Strongest Man contest exactly ten times. His greatest performance in the most prestigious Strongman show was in 2010, when he finished in 6th place.

Nick Best is now planning his comeback in Strongman, as he will take part in the 2022 Clash of the Masters. This competition will take place on July 23rd, in Columbia, MO. Robert Oberst also recently informed the public that “The Strongest Man In History” TV show will come back for another season. He also stated that Nick Best has accepted to be one of the main stars of the series once again. It seems like Nick has an extremely busy schedule, but that obviously did not stop him from adding new World Records to his name.