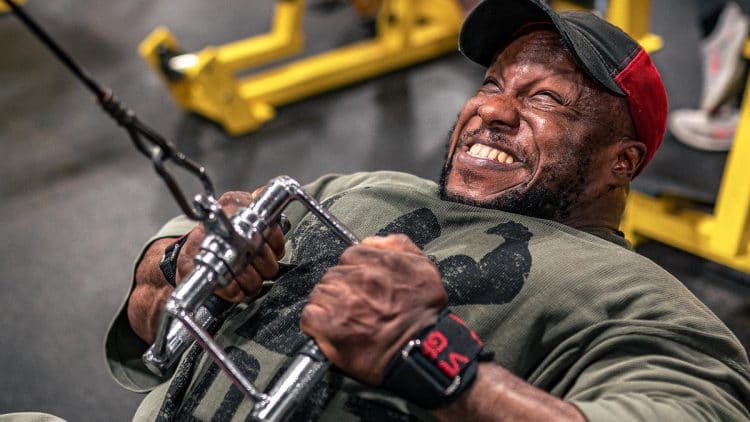 Bodybuilder Shaun Clarida recently shared his current back and biceps workout. Clarida is an elite 212 division competitor and has won several Pro shows during his professional bodybuilding career. However, winning the Olympia 212 title in 2020 marks his highest competitive achievement so far. After competing in the 212 division for the majority of his career, Clarida made a transition to the Open Pro division and won his divisional debut at the 2021 Legion Sports Fest Pro.

Clarida is currently in the bulking phase that will last for another three to four months. During this time, he will attempt to gain as much size as possible and start cutting down from there to prepare for the 2022 Olympia.

As a part of his training routine, Clarida has recently started a new training program that focuses on improving the upper and outer areas of the lats. Therefore Clarida has extensively incorporated movements like Meadows rows, cable rows, and dumbbells rows in his back workout.

“… To really focus on that outer lat area and try to get that lat dropping even more than it is. So…” Shaun Clarida said.

The video of this back and biceps training session was uploaded on Shaun Clarida’s YouTube channel on May 2nd, 2022.

Shaun Clarida’s back and biceps workout

Shaun Clarida admitted that Calves have always been a difficult muscle group for him to develop. Therefore he has started training them multiple times a week. To do this, he clubs calves with the back and leg workout.

“Yes I said it was a back day but Calves have always been that hard area for me.”

Clarida started the training session with Calves and did toe presses on the leg press machine.

“Just trying to get as much blood into that muscle as much as absolutely possible…” Shaun Clarida said.

After the warm-up sets, Shaun Clarida did a feeder set of five to six reps and followed it up with working sets of 20 to 30 reps each. Considering the smaller bones and tendons in the foot, Clarida prefers to do toe presses with moderate weights to avoid possible injuries.

Assisted pull-ups on the machine

“Simply, it takes the momentum out of the play. You get into a certain point in doing pull-ups, you are jerking, you’re using more biceps, using little legs to kick up. The assisting machine, it allows you to focus directly on the lats coming all the way up and coming all the way down.”

Clarida performed a few sets of assisted pull-ups to get sufficiently warmed up and moved on to the ‘first official exercise of the day’.

Meadows rows is a unilateral landmine exercise that targets the back. It is named after the late John Meadows who popularised this exercise in the bodybuilding circuit.

Clarida completed the first set with three plates on the bar. The 39-year-old then worked his way up to six plates in subsequent sets and used a lifting belt and lifting straps to lift with six plates.

Shaun Clarida next performed low rows on the machine. This movement is another effective way to build the outer lats.

Clarida completed the warm-up set with a single plate and then worked his way up to five plates. Based on the video editing, it appeared that he performed a feeder set followed by two to three working sets.

Shaun Clarida next performed this exercise to work the rhomboid and trapezius muscle in the back. While using a wide grip works the overall upper back portion, Clarida used a close grip handle to perform the flat bench cable high row. The close grip handle enables the person to keep his hands close to the chest when the weight is pulled. This isolates the rhomboid and trapezius muscles to a greater degree.

Following the same pattern as the previous exercise, Shaun Clarida started with a warm-up set and followed it up with a feeder set and two to three working sets.

After working the specific muscles in the back with the first few exercises, Shaun Clarida performed this compound movement that works the entire back.

While explaining his technique and its benefits, Shaun Clarida said:

“We’re using that whole eniltire back from top to bottom. Instead of just kind of going through that motion just ripping it, we’re taking our time coming up and we’re just driving our elbow back like we are doing a real lat spread… I’m doing the same with the bar. So from the bottom up, I’m driving my elbows, traps, erectors, rhomboids, lats everything…”

Clarida performed a few sets of rack pulls with progressive overload and jumped on to the finisher of the day.

Shaun Clarida finished the workout with three sets of dumbbell pull-overs. The focus of this exercise was again on the outer portion of lats. With this, Clarida’s back workout came to an end and he went on to perform the biceps movements.

Shaun Clarida started the biceps workout with barbell reverse curls. While the curls movement works the brachialis muscle in the biceps, the reverse grip activates the forearms.

Clarida added that he prefers to use the EZ bar for this movement as the wrists are at a more comfortable angle. He performed three sets of reverse grip biceps curls. The 29-year-old then finished the training session with seated biceps curls on the machine.

Clarida will embark on its next sporting endeavor at the 2022 Olympia, scheduled for Dec. 16-18, 2022, in Las Vegas, Nevada. It is unclear whether he will compete in the 212 division or compete in the Open bodybuilding for the first time at the Olympia. He will be able to compete only in one division.