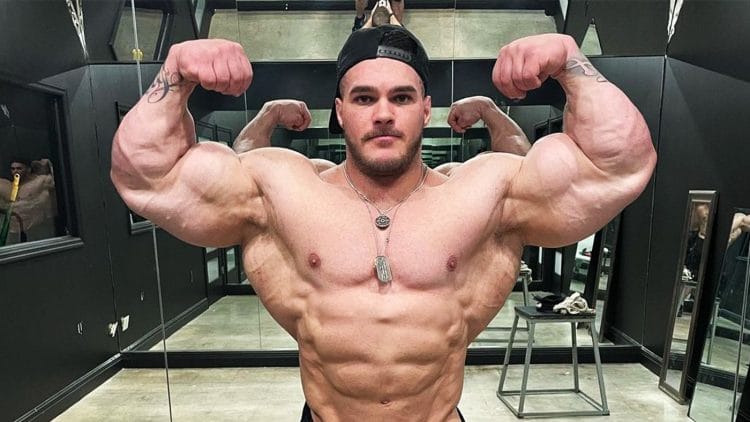 Pro bodybuilder Nick Walker is arguably one of the brightest prospects of our time. The 2021 Arnold Classic winner has emerged as a formidable challenge in the open division within a year of earning his pro card. Nick Walker has kept himself busy during the off-season. He recently tried a new back and bicep workout in the gym and shared the video on his YouTube channel to share some valuable tips.

At the beginning of the video, Nick Walker stated that his focus was to train his back and biceps with free weights with lesser emphasis on machines.

The workout was not pre-planned and Nick decided his workouts as he went along.

Nick Walker starts the back workout with three sets of reverse grip lat pull-downs with 10 reps each. While he performs this workout in a traditional way, Walker does bring the bar down to the upper abdomen and holds it there for a second to work the lower pectoral muscles.

Heavier weights are generally associated with higher gains and rapid progress. However, the 27-year-old begs to differ and opines that ‘it’s not about weight. It’s about how much weight you can control.’ Walker also advises staying upright and avoiding leaning back while doing lat pull-downs to get a proper contraction in the lats.

Nick Walker then proceeded to the brutal and effective bodybuilding staple to build the upper back muscles. While it is common to use a bar for rows, Walker stated that dumbbells enable bringing elbows further back to get more contraction. After completing three sets of 10 reps each of dual bent over dumbbell row, it was time to work every muscle in the posterior chain with a Smith machine deadlift.

Once again, Nick Walker did not load heavy plates on the machine and instead opted for 25lbs plates on either side to get three sets of 6 to 8 reps. The 27-year-old usually does this as the second workout during the back day. However, he admitted that it was especially difficult to pull off as the fourth workout of the day.

Nick Walker capped the back workout with a superset of assisted pull-ups and pullovers with a hammer strength machine. For this workout, he performed 2 sets of each exercise followed by the other for 7 to 12 reps.

After wrapping up the back routine, Nick Walker shifted his focus to biceps. He believes that arms respond better to moderate weights with shorter rest periods between sets. Walker then voiced his opinion about the problems associated with heavy weights for arms.

“If you go too heavy on arms, fluster your elbows, wrists, it affects you bigger lifts.” Nick Walker stated.

Nick Walker told that he prefers to do 12 to 15 sets of arm exercises and started the bicep training with what he explains to be one of his favorite exercises for biceps. After performing two sets of standing cable bicep curls in quick succession, Walker moved on to the next one keeping the rest period to a bare minimum.

Followed by standing curls was the exercise aimed at fully activating the biceps and forearms. Nick Walker performed one set each of top and bottom partial curls followed by a set of full curls.

Nick Walker’s bicep workout came to an end with three sets of 12 to 15 reps of hammer curls.

After putting his body through the strenuous session, it was time for Nick Walker to feel good about putting in the work. Following a post-workout posing routine, Walker stated that the combination of workouts felt good for him and that he will continue to follow the same routine for back and biceps for a while.

At the time of shooting the video, Nick Walker weighed 278lbs and stated that he is trying to gain weight slowly for the next competition season.

“I don’t plan on getting drastically heavier. I mean if I do, as long as training’s not suffering, I have good condition and I feel okay, f* it. But it’s not the goal so I definitely like where I am now, how I look being almost 280lbs. Last time I was 280, I feel a lot leaner now,” Nick Walker said.

Nick Walker is a IFBB Pro open division bodybuilder. A tormenting childhood experience pushed the New Jersey native towards the life of alcohol and drug abuse. However, a desire to set things right introduced Nick Walker to lifting and set him on the path to becoming of the most promising bodybuilders of this Era.

Nick Walker earned his pro card with a win at the 2020 NPC North American Championship. He has since competed in four sanctioned competitions and finished in the top five in all of them. The pinnacle of Nick Walker’s achievements is his gold medal win at the 2021 Arnold Classic, the second biggest bodybuilding competition in the world after Mr. Olympia. The 27-year-old followed up the win with a fifth-place finish at 2021 Mr. Olympia.

New opportunities will present themselves in the year 2022 and all eyes will be on Nick Walker to see how he fares against the elite competition in the new year.

Courtesy of Nick Walker’s YouTube channel, you can watch the full video of his back and bicep workout here: