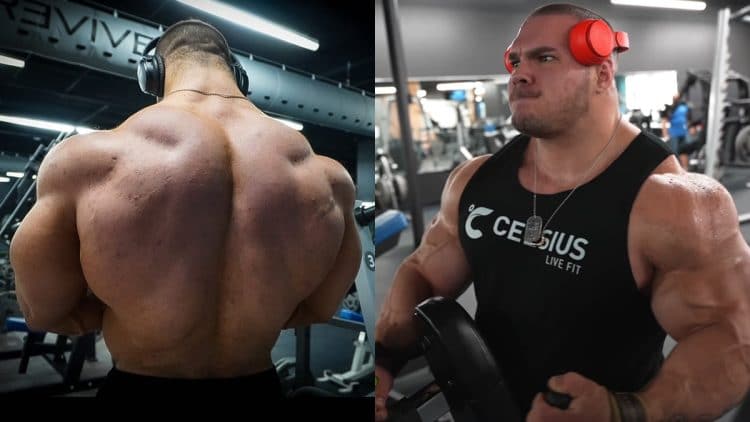 2021 Arnold Classic winner Nick Walker recently shared an effective back workout. Walker is one of the most promising competitors in the Open Pro division. Within a year of earning his Pro card, the 27-year-old won the 2021 New York Pro and the 2021 Arnold Classic. After finishing 5th at the 2021 Olympia, Nick Walker has been taking an extended break from competition to prepare his body to compete against the very best that the division has to offer. Walker will return to the stage at the 2022 Olympia. The competition will take place in December and ‘Mutant’ is leaving no stones unturned to bring the best version of himself on stage.

The off-season training is going on full throttle and Nick Walker shared the back day workout on his YouTube channel. The new workout focused on lesser repetitions with heavier weights than usual.

Nick Walker started the back day with this workout and slightly modified the seat set-up to focus more on the lats. While explaining the modification, Nick walker said:

“This is going to be more aligned with hitting the lats rather than being straight under. Just a direct right path into the lower lat,” Nick Walker said.

Walker did not reveal the exact amount of weight he pulled for this exercise. However, he completed the first two sets with 12 reps each. Later, he reduced the weight and performed the next two sets with slower movement to get the extra squeeze in the muscles.

Nick Walker then moved on to the Smith Machine. Machines allow the person to control the weight better compared to free weights. This works the target muscles to a greater extent and also significantly reduces the chances of injuries. However, Walker explained other reasons behind him choosing the Smith machine over a regular barbell and said:

“I do like these over the free weight. It’s just that I contract harder, I can feel my lats engage better. Again, that’s the point of bodybuilding. It’s not about the weight necessarily. That comes in time. It’s about contracting muscles the best you can and this is where I feel with the most.”

After getting fully warmed up with the first two movements, Nick Walker performed the working set of prime rows.

Once the working set was in, Nick Walker went on to add a superset of plate-loaded rows in his back workout. He performed two rounds of top grip and bottom grip plate loaded rows with two plates on each side. Walker tried to hit ten reps with each grip and succeeded in doing so.

A post shared by Nick “the Mutant” Walker (@nick_walker39)

Nick Walker’s next back workout was a finisher that focused on the time rather than the number of reps. Walker performed one set of bent-over pull-downs. The set included two rounds of 15-second pull-downs followed by 15 seconds rest. With this movement, the back workout came to an end.

Nick Walker closed the day with standing calf raises on the machine and called it a day.

Nick Walker assessed his performance and the circumstances that led him to formulate the back workout in this particular manner at the end of the video.

Walker stated that his body ‘felt a little bit brat up’ and therefore he chose to go through the back workout with a little heavier weights than usual with lower rep volume.

“Sounds a bit contradicting but I don’t feel as beat up (after the workout). I was able to go heavier, contract the muscles still, and just did lower volume and I got what I needed to get out of it,” Nick Walker continued.

Nick Walker stated that it was probably time for him to incorporate more rest days in his training routine to allow his body to recuperate.

“You’ve gotta pay more attention to the body. I’m used to being on the go! Right now would be the longest off-season for me. Usually, within the past two years I would be back in the prep by now.

So the body would be still on the move technically. Now that the time is flying by now so the body is in full off-season now. So I have to pay more attention to it so far as the rest goes and how I feel,” Nick Walker concluded.