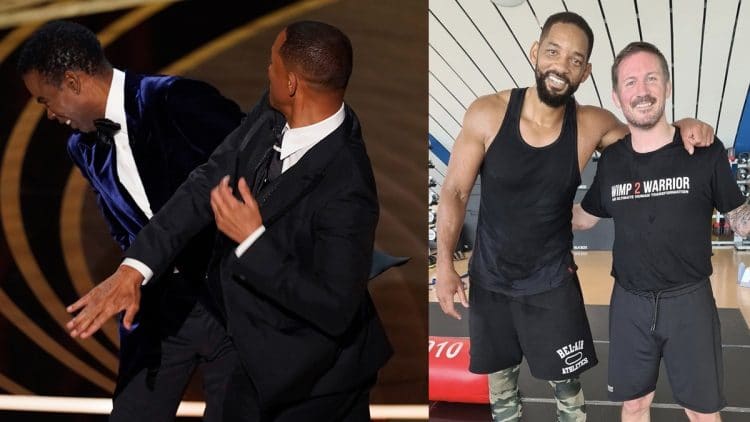 Will Smith has trained alongside some of the brightest minds in MMA including Conor McGregor’s coach John Kavanagh. After Will Smith approached the Academy Awards stage and slapped presenter Chris Rock, mixed reactions were felt worldwide with MMA coach Kavanagh being the latest to chime in.

John Kavanagh, and actor, Will Smith have trained MMA together in the past. Ireland’s Kavanagh is no stranger to the realm of combat and is responsible for training the biggest superstar in the sport, Conor McGregor. McGregor is known for his finishing ability and punching power. The Irishman is a knockout artist and prefers to win fights with his standup abilities. Training with Kavanagh since entering the UFC, his coaching abilities have been proven inside and outside the octagon.

John’s knowledge of MMA is lauded and the two reached the pinnacle of the sport after McGregor secured titles in the UFC’s featherweight and lightweight divisions. However, when John isn’t fine-tuning the weapons of “The Notorious”, he’s helping Will Smith remain combat-ready at 53 years of age.

Coach John Kavanagh Reminisces Fondly on Training with Will Smith

Following the Academy Awards controversy with Chris Rock on Sunday, coach Kavanagh shared a throwback photo of when he trained Smith in 2021.

During one of McGregor’s training camps in 2021, John and Smith linked up in Dubai, UAE to get in some training. According to Kavanagh, Smith was determined to learn a thing or two about fighting.

“That was a weird situation that popped up,” Kavanagh explained.

“I was in Dubai training with Conor and his people were on to my people, as they say. Would I be interested in doing a session with Will Smith? Absolutely I would. I’m a massive fan, I couldn’t believe it.

“I got to go out to an incredible sport complex out there. I’ve got a warrior programme and I put him through a typical session. I was super impressed with him.”

Training MMA and boxing is not an unusual thing for the Hollywood juggernaut. In 2019, Will Smith starred in Ali, where he portrayed the legendary boxer Muhammad Ali, focusing on his notable triumphs and controversies between 1964 to 1974.

“One of my favourite moments was that between rounds, he goes and sits down, just like a fighter would and I’m sitting by his side just like I would when I’m cornering a fighter and giving him advice in the ear.

“I really try to get them in the mindset of a fighter. While I was doing that, Will was hunched over, very focused, staring into space.

“I thought: ‘Oh my god, this is the guy who played Muhammad Ali. This is a scene from that movie.’

“It was one or two seconds of: ‘What the hell is going on with my life! How did this happen? Fresh Prince of Bel Air here, Muhammad Ali and he’s tuned into everything I’m saying.’

Sharing his weight loss journeys on social media, Smith is held in high regard by his fans due to his transparent nature. After ballooning in weight during 2021, Smith admitted that was the worst shape he’s ever been in. Ever since dropping the weight, he is determined to stay as healthy as possible.

Despite the Academy Awards controversy, Smith has no ambitions to enter the cage or ring anytime soon. Nevertheless, his former coach, John Kavanagh only had nice things to say about his time training one of Hollywood’s most successful actors.

Although currently in the news for the wrong reason, Will Smith is undoubtedly one of the finest actors of our generation. The...