Russian powerlifter Yury Belkin deadlifts an all-time-world-record of over 4.5 times his bodyweight. 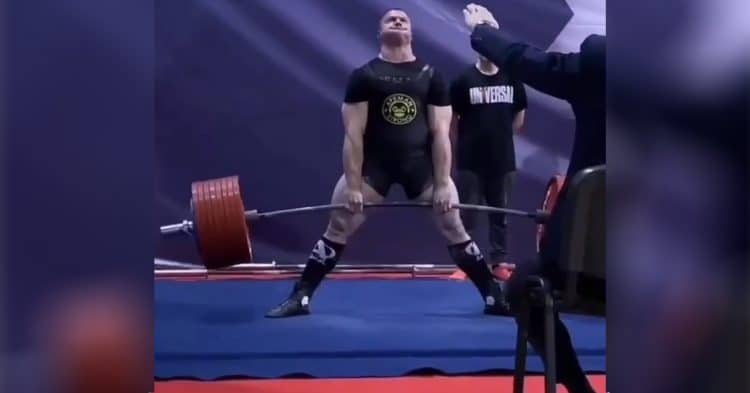 Yury Belkin said it was his first and last attempt, and that’s all it takes to make an all-time-world-record. This happened over the weekend when Russian powerlifter Yury Belkin deadlifted 445kgs/981.1lbs in the 110 kgs weight class.

It’s not the first time he’s broken records, but he broke the record this time in a weight class that was 7 kgs/15.4lbs more than his actual body weight. The lift itself was just 10 pounds heavier than the previous all-time-world-record that occurred in February 2020 at the World Raw Powerlifting Federation Hybrid Showdown II.

That record was set by Jamal Browner from the United States at the World Raw Powerlifting Federation Hybrid Showdown II.

Related: 12 Benefits of Deadlifts Everyone Should Know About

Yury’s previous record in the same weight class was 110kgs/970lbs in 2017 at the World Raw Powerlifting Federation Pro World Championships.

Just after the competition, Yury Belkin posted the deadlift to his Instagram. He said it was his first and last attempt.

That was the first and the last attempt”

Yury Belkin is just 29-years-old and has been competing in powerlifting since he was 17. He first began competing in the Russian Powerlifting Federation Far East Cup where he placed fifth among some of the best in the world.

Since the age of 17, Yury has competed in 46 powerlifting competitions and hit the first place mark in 30. It’s a career win of 65 percent, and includes four world records, prior to his all-time-world-record this past weekend.

Other records that Yury Belkin has hit occurred in the 110 kilograms weight class. That includes this weekend’s record where he performed the deadlift of 445 kilograms and 981.1 pounds. He had an additional world record in 2019 in the 110-kilogram weight class at the 2019 ProRaw Big Dogs event where he totaled 1,070 kilograms/2,359 pounds.