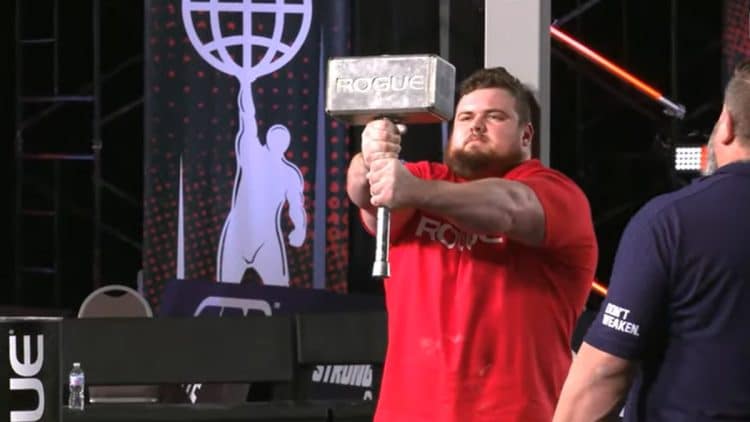 The competitors were expected to hold the hammer for at least 35 seconds to win the prize money of $5000. The athlete that maintained the grip and posture for the longest time would be announced the winner of this event. Furthermore, the athletes required to keep their head, upper back, and hips in contact with a post while holding the hammer between their shoulders at eye level with arms locked out. Courtesy of Rogue Fitness’s official YouTube channel, you can watch Trey Mitchell complete the Goliathan task and break the record here:

Some of the competitors used assistive equipment like wrist wraps and a lifting belt. However, Trey Mitchell did not use any of that equipment and chose to lift the hammer unassisted.

Charles (Trey) Mitchell is one of the established names in the strongman sport. The 2016 Arnold Amateur Strongman Classic was Trey Mitchell’s first notable competitive appearance. Mitchell has amassed several national and international wins in the strongman sports since then. The overall championship win at the 2021 Shaw Classic is Trey Mitchell’s biggest career win so far. Mitchell bested formidable opposition in 4-time World’s strongest man Brian Shaw and Canadian strongman J.F. Caron en route to a first-place finish at the competition. Shaw and Caron finished second and third, respectively.

During his six-year-long strongman career, Mitchell has competed in seventeen national and international competitions. He also qualified for the 2021 World’s Strongest Man and finished fourth overall. Scottish powerhouse Tom Stoltman won the event while Brian Shaw and Maxim Boudreault were the only other strongmen that scored more points than Trey Mitchell at the event. He last competed at the 2022 Arnold Strongman Classic that recently wrapped up in Columbus, Ohio. Martins Licis won the competition and Mitchell finished seventh in the open division.

As of now, it is not confirmed if Trey Mitchell has received or accepted the invite to compete at the 2022 World’s Strongest Man. The event will take place from May 24th to 29th, 2022 in Sacramento, California. Trey Mitchell’s recent feat at the 2022 Rogue Record Breakers event proves that he is on the right track to make necessary improvements and create a formidable legacy in the years to come.