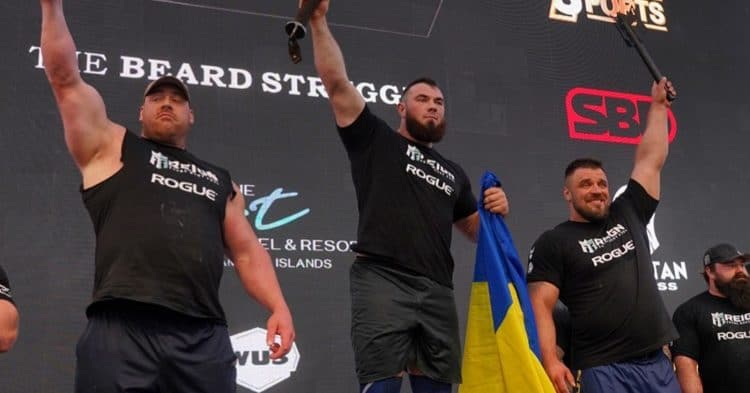 At just 24 years old, Oleksii Novikov of Ukraine has already made Strongman history, winning the 2020 World’s Strongest Man contest and setting a world record in the process. Well, he can add another accolade to his resume after winning the 2021 World’s Ultimate Strongman “Strength Island” contest in Bahrain on March 13.

The competition was shown on multiple outlets including Core Sports, Rogue YouTube channel, and ESPN.

The World’s Strongest Man and many of the world’s best Strongman athletes came together to see how they faired against each other at this event. Among them included J.F. Caron, Rob Kearney, the popular Stoltman brothers, Rauno Heina, Bobby Thompson, and other top Strongman competitors.

The axle deadlift was up first and after the field of elite Strongman athletes had their turn, including a few deadlift specialists, few expected the American Bobby Thompson to pull away with the win.

For this event, athletes had to lift various weights ranging from 705-970 lbs and if you watch the video below, you’ll see that it wasn’t a regular deadlift, but rather, they used large plates in addition to regular plates, that shortened the range of movement.

As suggested by the name, the mystery event wasn’t a mystery until it wasn’t and competitors learned they’d be doing the flag hoist event (nothing like the element of surprise). Although, they did have a full day’s notice.

So for this event, 75 kg of weight plates were attached to a rope with a flag right above it, and it was set up using a pulley system. The idea was to pull the flag to the top at a height of 50m, before lowering it back down under control.

Competitors had a minute to do this as many times as possible and Luke Stoltman ran away with the win, completing four pulls in less than 42 seconds.

Ramin Farajnejad was second and the eventual champ Oleksii Novikov came in third.

This event sounds intimidating because it is but who better to attempt it than the world’s elite Strongman competitors.

The details for this event are pretty straightforward. Lift the dumbbell to shoulder level and press it overhead. The allotted time to complete as many reps as possible was 75 seconds or a minute and 15 seconds.

As expected Novikov outperformed hitting 10 reps, which is one rep shy of his world-record-setting 11 reps feat that he achieved last year as part of the World’s Ultimate Strongman “Feats of Strength Series”.

To make matters worse, athletes had to load these very large objects onto a platform above waist height but whoever could carry and load the fastest wins the event.

The winner of this event was Oleksii Novikov who won two straight events at this point with only one left. But at this point, things were looking very good for the young Ukrainian.

Last but certainly not least, the Atlas Stone Run when the competitors are all tired out from the prior events.

In this event, athletes had to pick up and place the stones onto the platforms with a two-minute limit.

No surprise here that the current world record holder in this event, Tom Stoltman came out on top. Prior to this competition, he loaded all 10 stones in 40.7 seconds but that record will hold for now as his time at this event was 67 seconds.

Novikov also managed to load all stones and this was more than enough to seal his victory.

Canada’s J.F. Caron was second overall and Aivars Smaukstalis scored enough points during the competition to land himself on the podium.

It was an exciting day of events for the world’s best Strongman athletes but there could only be one winner and that was Ukraine’s Oleksii Novikov.

You can watch the entire competition below…

Short on time? Here’s an epic recap of the results…