4x World's Fittest woman Tia-Clair Toomey is back in Tennessee to take on the first CrossFit Open workout. 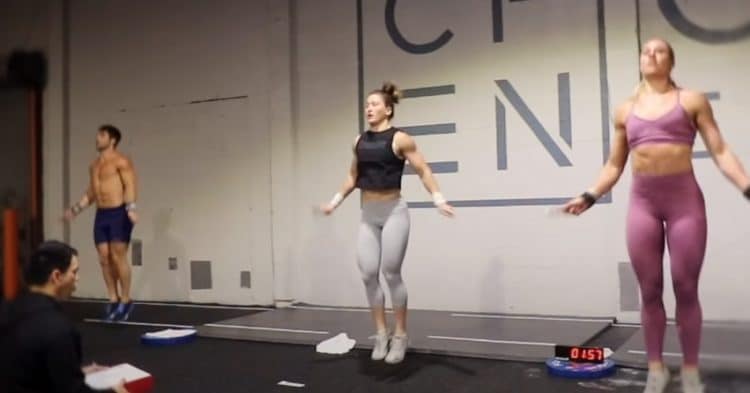 The first workout (21.1) of the three-week-long 2021 CrossFit Open is currently underway after it was announced on March 11, 2021. Hundreds of thousands of people from around the world take on the workouts remotely, record, and submit their performances to see where they stand among the rest. 4x CrossFit Games Tia-Clair Toomey recently shared tips for performing 21.1 and she also took on the workout that was posted to her YouTube channel.

Toomey, an Australian native, recently announced that she and husband/coach Shane Orr were leaving for Korea to train with the Australian women’s bobsled team in hopes that she would qualify to represent her country at the 2022 Beijing Winter Olympics.

She has a ways to go and it’s not been easy especially with travel and having to quarantine but that’s all part of the journey right now.

But she’s back in her CrossFit home of Tennessee at CrossFit East Nashville where she and the PRVN crew (Tia-Claire Toomey, Brooke Wells, and Alec Smith) took on the Open 21.1 workout.

While the first video only showed team PRVN performing the workout, Toomey did share something at the end that’d also be of interest to fans.

“Hopefully, I’m doing really in this workout and my shoulders aren’t too blown up, but if you guess where I’m at and what I get for the end of the 21.1, then we’re doing a giveaway for a pair of NOBULL shoes for the lucky winner.”

For those who don’t know, Toomey is a NOBULL athlete and the brand is also the new title sponsor of the CrossFit Games whereas Reebok was previously.

A video showing more of the behind-the-scenes stuff was also posted on the PRVN YouTube channel. So while there was no talking in the one on Tia’s channel, you’ll see a lot more of that below.

“I don’t mind about going on but the pain that we’re about to ensure in the upper body,” said Toomey.

One of the trainers added that they are going to be really sore for the next few days following the workout because they aren’t used to do the movements in the workout.

After the double-unders, Toomey gave some useful advice.

“The first fifty double-unders are the killer, and I was like oh shit my upper body. but then it gets after fifty, you start to find a rhythm, and so just get to fifty and you’ll like you’ll flush it out and then you can get into a comfortable double-under pace.”

She told the others not to overthink it and to just get to fifty and it’ll be smooth sailing from there.

Afterward, Toomey explained that they started the day off with 21.1 but still needed to do their other training.

“It’s not a huge priority for us,” she said referring to the Open workout.

The fun has only just started and we’re excited to see how the Open progresses over the next few weeks. We’ll be sure to keep you updated though as usual.

The reigning 5x Fittest Woman on Earth®, Tia-Clair Toomey, had the honor to announce the first Open Workout of the...

The 5x Fittest Woman On Earth®,Tia-Clair Toomey is one of the central athletes for the 2022 CrossFit Season, as she will...

The five-time Fittest Woman on Earth®, Tia-Clair Toomey-Orr, is ready to shed some bobsled weight ahead of the 2022 CrossFit...