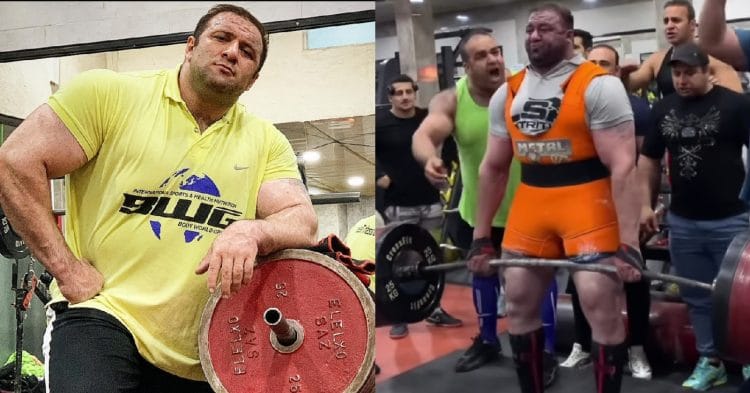 The race is on to see who will be the next man to score a new world record with the deadlift. Iranian Peiman Maheripourehir continues to prove himself a legitimate threat to this record with a recent pair of intense lifts in the training room.

From the moment that Hafthor Bjornsson pulled 501kg raw last year to set a new world record, all kinds of powerlifters and strongmen have done their best to try topping this. However few have come as close as Maheripourehir, who has looked unstoppable in recent training videos.

He was back at it again with another post to his Instagram, showing how close he is getting to that world record. He shared a pair of videos, with the first one showing him deadlifting 492kg with a lifting suit, as well as 450kg raw.

There are some legitimate questions about the lockout on that first lift, and whether or not he would have gotten the nod from judges if it were in competition. However Peiman Maheripourehir definitely removed all doubts with that raw deadlift, holding that long enough to look around the room with pride, although it is worth noting that this seems to be an older video that he included.

Regardless, this was still an awesome pair of deadlifts, and it continues to prove that he is someone to watch when it comes to potential threats to the deadlift world record. Of course this does not come as a surprise to anyone who has been paying the least bit of attention to him over the last few months, as they would have seen the insane level of growth he has shown, and the mind melting deadlifts he has hit in the training room.

While his updates have been few and far between as of late, Maheripourehir has been putting in the work to constantly build and add to his deadlift skills. He has been constantly grinding and doing what needs to be done to exponentially improve upon his numbers, such as this 425kg deadlift double he hit a few months ago.

Peiman Maheripourehir seems to be convinced that he will eventually be the one to break Thor’s deadlift world record, and while he has a bit of work to go to get there he certainly has the potential to get there eventually. He is always looking better with each outing, and it is going to be interesting to see how long it takes for him to make an official attempt at that record.