Phil Heath wishes Dexter Jackson a happy birthday but not without poking some fun at him! 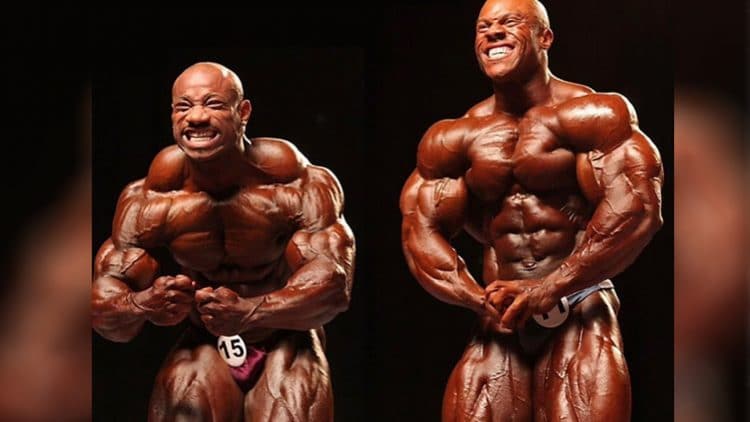 It’s hard to believe that the legendary Dexter Jackson turned 50 years old today (November 25) seeing as how he’s still placing in the top 5 at the Olympia (4th place at the 2019 Mr. Olympia contest); which is absolutely mind-blowing. And there’s no one in professional bodybuilding who has been able to achieve what he has been able to at his age.

Well… we’re in 2019 and Dexter Jackson is still a threat to the title, not to mention, he recently confirmed that he’d be competing at the 2020 Olympia.

So, there’s not much else to say about this superhuman other than to wish him a big happy birthday, and that’s exactly what the 8x Mr. Olympia champ Phil Heath did. And, of course, seeing as how both are no strangers to engaging in playful banter with each other, Heath wasn’t about to hold back with the age jokes.

Check out the birthday wish from the “Gift” below…

“I would like for everyone to wish @mrolympia08a Happy 50th Birthday!!! He’s definitely one of bodybuilding’s greatest champions and OLDEST haha. But seriously, Dexter, you have exhibited the perseverance and ability which only comes from hard work, intelligence and truly an iron will to never give up and produce some incredible successful moments. I salute ya and although I give you a bunch of jokes, it’s all in good fun because that’s what friends do right?! Ok ok ok now I just can’t resist this moment to bring home the razzing of this old man who calls himself “The Blade”.
For your 50th I feel it’s necessary to send some gifts being that I am “The Gift” so, I’m sending you some more of that geritol tonic you like, along with some Ensure Shakes, some Sketchers with the extra padding on the soles, a Poster of you at the Last Supper, an ancient sea turtle because you both are about the same age and are becoming extinct, some Vick’s Vapor Rub for those long hours climbing up the stairs in your house before bed and last but not least, a t-shirt that says, Old Lives Matter haha. Ok my G love you and I truly wish you a great freaking day because you’ve accomplished so much that I’m positive you will be even more motivated for the next 50yrs to come!“

Dexter Jackson also took to Instagram to thank everyone and express his gratitude for all the birthday wishes… “ITS MY BIRTHDAY!!!! 😬😬👏🏾👏🏾 Thank you guys for all the HBD wishes!!” he wrote.

We’re excited to see what the new year brings for the Dexter Jackson and we’re also pretty fortunate to be able to witness such an amazing talent who can still hang in there with the best at age 50.
For the latest news and updates please follow us on Instagram, Facebook and Twitter.
FacebookTwitterRedditFlipboardLinkedIn
Categories: Bodybuilding News
Previous Post