Phillip Herndon still has 12 weeks until his next competition, but is already making waves in the training room. 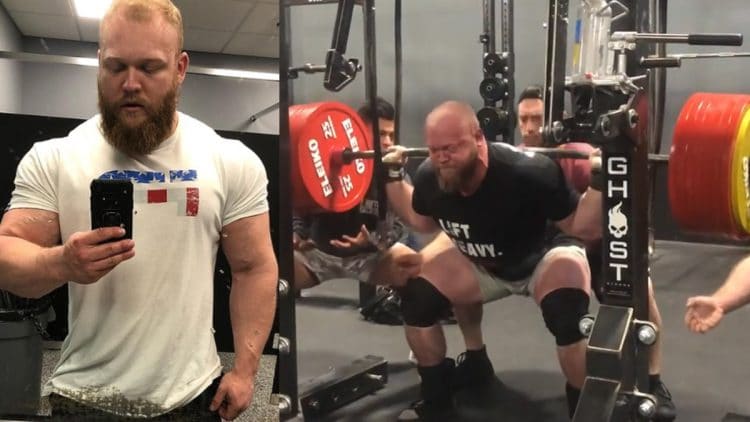 After reclaiming his All-Time World Record Squat with wraps in the 110-kilogram weight class just a month ago, powerlifter Phillip Herndon has set his goals even higher and is working hard to achieve them. He is 12 weeks away from his next competition, but is already squatting some incredibly massive weights. Phillip’s recent training session caught the eye of many fans, as he squatted 410 kilograms (903.9 pounds) with absolute ease.

Phillip Herndon almost exclusively competes in the raw w/wraps division of powerlifting. So he used a lifting belt, knee wraps, and wrist wraps to aid him to breeze through his huge squat. Phillip fully controlled the weight down until he hit the required depth, upon which he rapidly squatted back up.

Phillip Herndon’s 410-kilogram (903.9-pound) is just a part of his preparation for the 2022 WRPF American Pro. It is one of the biggest powerlifting meets on the East Coast, and it will take place on July 29-30, in Manassas, VA. Considering how heavy Phillip is lifting at this stage of his prep, it seems like he will be the man to beat at the 2022 American Pro.

Phillip Herndon At A Glance

At only 26 years of age, Phillip Herndon has accomplished a lot in the sport of powerlifting. His first professional competition was in 2013 and since then, he has accumulated 35 appearances in sanctioned meets. Phillip has won 23 of them, but he is currently on a winning streak having won nine of his last competitions. For the past three years, Phillip has constantly been competing in the 110-kilogram weight class, and he will probably stay in it for the foreseeable future.

Phillip Herndon was an All-Time Squat W/Wraps World Record holder before Daniel Misencik claimed the record in February of this year. However, Misencik’s joy did not last long, as Phillip Herndon squatted 435 kilograms (959 pounds) at the 2022 USPC Mid-Atlantic Classic to once again bring the World Record to his possession.

At his last competition, Phillip Herndon attempted to squat 455 kilograms (1,003.1 pounds) but was unsuccessful. If he attempts to lift it in his next competition, and does it successfully, Phillip will become the lightest man to squat 1,000 pounds (with wraps) in an official competition.