Fearing that Iranian Hulk would commit suicide after their potential boxing match, Martyn Ford opened up about the recent cancellation. 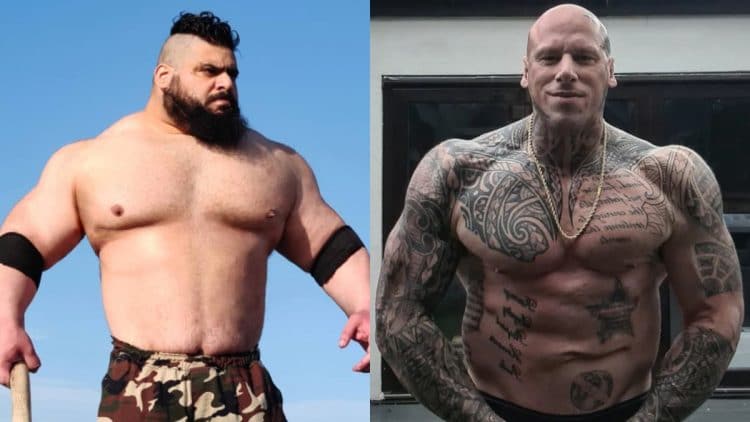 The highly anticipated boxing match between the Iranian Hulk (real name Sajad Gharibi) and Martyn Ford never came to fruition and Ford believes he knows why. Ford revealed on Instagram Live that he feared Iranian Hulk would kill himself if their potential fight took place.

Ford and the Iranian Hulk have been on a collision course for the past few years. Britain’s Ford was expected to make his boxing debut against Sajad Gharibi last month, but the fight fell apart, with both teams pointing fingers at each other for the cancellation. Before the boxing match came about, Ford and Gharibi were slated to make their MMA debuts against each other for the Polish MMA promotion KSW, but that also failed to materialize.

According to ‘The World’s Scariest Man’, he sensed something was off following their heated face-off altercation in Dubai. When Ford met with Iranian Hulk in person, he towered over his opponent, though Gharibi attempted to tackle Martyn to the ground anyway. Ford didn’t budge, and after the two re-set for another face-off, Martyn pushed Iranian Hulk to the ground with relative ease.

As a result of their altercation, the Iranian Hulk’s family disowned him. Gharibi relayed that his mom was embarrassed and thought her son was stronger than what she witnessed during the viral face-off encounter. While Martyn was more than ready to make his boxing debut, he stands by the fact that Iranian Hulk crumbled before they could meet inside the ring. Following the fight cancellation, Gharibi suggested Ford was responsible and stated his intentions were to sue his team for a breach of contract.

Martyn Ford Shoots Down Boxing Debut with Iranian Hulk: “There is no Fight”

In a recent Instagram Live session, Martyn Ford explained why his boxing match with the Iranian Hulk is off the table. Ford implied that his fight was in jeopardy after the violent face-off and previously stated that the bout fell apart due to ‘health and safety risks‘.

“I have genuine concerns about his mental health and how he’s feeling. It is who I am. I can’t fight someone who I genuinely believe can take his own life after the fight,” Ford told the Mirror.

“As an outsider people might say, ‘What are you on about?’ But from someone who was there, who saw him and the way he crumbled. We had a face-off and it was one little push. I looked in his eyes and then turned around and said to the guys, ‘There is no fight’.

“What happened afterwards I already felt bad about, the amount he got bullied and his reaction to being bullied breaking down on National TV. Then his parents came out and said ‘we don’t want anything to do with you, you are weak’. Then on Instagram Live when he turned around and said he hates Iranians and wants to end his life. I just thought, ‘No I can’t be a part of this’.” Martyn Ford said.

Despite his marquee showdown with the Iranian Hulk being canceled, Martyn continues to fine-tune his boxing skills and plans to make his debut in the sport soon. There is currently no opponent in mind but Martyn is actively training and staying ready just in case.

“I am still training, only thing I am not doing is active sparring. I have switched back into its resistance and explosive power. If something does happen which I am hoping I can sign up too soon, I have been training and dedicating so much time and effort to it.”

Ford recently admitted that he’s looking bigger than ever on the heels of his canceled fight. His plan was to enter the fight at 320-lbs, stressing that he’s ‘made a beast from scratch‘. As it stands, it doesn’t look like he has any interest in lining up another fight with the Iranian Hulk. Meanwhile, Gharibi has been overwhelmed with frustration over the canceled match and squashed a frying pan in a display of anger.

Ford is remaining active and intends to make his boxing debut in the near future. Martyn is glad he’s not facing Iranian Hulk as he questioned his mental health leading up to the fight.