Is the suicide grip smart or stupid? We take a look at the thumbless grip so you can determine if it’s right for you. 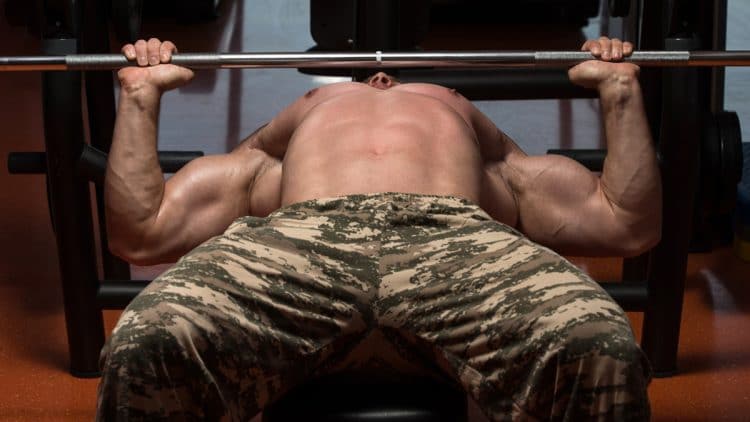 You’d be forgiven for thinking that holding a barbell is simple. You might not even consider your grip unless it starts to fail partway through a set of deadlifts! But, in actuality, the way you hold your bar can have a significant impact on your workout performance, and there are at least seven different grip variations you can use.

Each one has advantages and drawbacks, so it’s essential to use the right one for your goals and the exercise you are doing.

Of all the grips to choose from, the so-called suicide grip is arguably the most controversial. Also known as a false or thumbless grip, the use of the word “suicide” strongly suggests that this is a dangerous option that’s best forgotten.

However, like so many bodybuilding and strength training-related topics, the truth is not so cut-and-dried. There are pros and cons to using the suicide grip.

In this article, we explain what the suicide grip is, when using it may be helpful, why it can also be dangerous, and how to minimize the risks when using it.

What Is the Suicide Grip?

Bodybuilders and powerlifters have been using the suicide grip for as long as they’ve been lifting barbells and dumbbells. However, it is somewhat divisive and is not allowed in most powerlifting competitions.

The suicide grip involves holding your bar, dumbbell, or machine handle with your fingers, but without wrapping your thumb around it. The bar sits toward the heel of your hand and over your wrist joint.

It’s most commonly used in pressing exercises, such as the overhead press, bench press, and triceps pushdown. However, you can also use it for pulldowns, curls, rows, etc., although doing so tends to weaken your hold on the bar. Some lifters also like to use the suicide grip for squats.

For some lifters, the suicide grip “just feels right,” but others view it as an accident waiting to happen as you have less control over the bar. However, there are advantages and drawbacks to the suicide grip.

For some lifters, the suicide grip just feels right. With the bar resting more toward the heel of your hand, where there is more fleshy padding, going thumbless can make heavy pressing more comfortable.

Easier to keep your wrists straight

Pressing heavy weights can be hard on your wrists. You’re SUPPOSED to keep your wrists straight during bench and overhead presses, but that’s not always easy. A lot of lifters wear wrist wraps to help support their wrists and keep them straighter.

Using a suicide grip puts the weight over your forearms, so your wrists are less likely to bend backward. This takes stress off your hard-working wrist joints and may mean you don’t need to use wrist wraps.

Bench and overhead presses are vital exercises for building a stronger, more muscular upper body. Whether you do them with barbells, dumbbells, or on a Smith machine, you need to press if you want to build the body of your dreams or impressive levels of strength.

Unfortunately, all types of presses can also be hard on your joints, often leading to shoulder pain and elbow pain. That’s partly because using a regular grip locks you into a position that puts a lot of stress on your glenohumeral (shoulder) joints, as well as your elbows and wrists.

When you use a regular grip, your hands turn in slightly. This automatically forces you into an internally rotated shoulder position, which is linked to shoulder pain and rotator cuff problems, such as impingement.

Switching to a thumbless grip allows you to rotate your elbows and shoulders slightly outward into a more comfortable, biomechanically advantageous position.

In simple terms, using a false grip means you can tuck your elbows in, which is more shoulder-friendly than letting your elbows flare out to the side.

For some lifters, this means not just fewer aches and pains but more weight on the bar.

While the suicide grip can be beneficial for some lifters, it’s not without notable drawbacks. Consider the following cons before using a thumbless grip in your workouts:

Less control over the bar

Your thumbs might be small, but they’re powerful and play an essential role in maintaining a solid hold on the bar. Without your thumb around the bar, it could roll off the heel of your hand and come crashing down on your head or chest.

It’s this clear and present danger that makes the suicide grip such a controversial topic and why many people are so against using it.

Warning: This video is very shocking and demonstrates what can happen if your false grip fails…

In short, the tighter you clench your fists, the more tension you can generate in the rest of your body. He calls this phenomenon irradiation. This technique is commonly used in martial arts and is written about extensively in all of Pavel’s kettlebell training books.

Pavel goes so far as to encourage fist clenching during RKC planks to maximize core engagement.

For some lifters, not gripping the bar in the normal way could mean a reduction in muscle engagement, leading to a less productive workout. However, no studies support or refute irradiation, so you’ll have to try going thumbless to see if it affects your ability to fully engage your muscles.

The biggest drawback to the suicide grip is the risk of losing control of the bar and dropping it. Even light weights could cause serious injuries. For example, imagine dropping just an empty 45-pound/20kg bar during bench presses and it coming down on your nose or teeth! 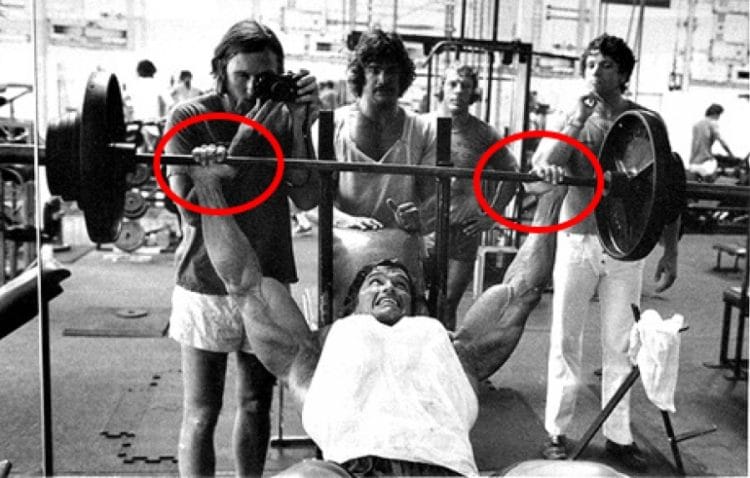 So, if you DO decide to use the suicide grip, these are the rules you should follow:

This rule is not negotiable! Accidents can happen to even the most experienced lifter. Protect yourself from serious injury by having a spotter on hand whenever you use a suicide grip.

Use the spotter to help you un-rack and lift the bar into the starting position, shadow you throughout your set in case you slip mid-rep, and help you re-rack the bar at the end of your set.

Don’t switch from a regular grip to a suicide grip overnight. Instead, spend a few workouts getting used to it and using lighter weights. Only increase the poundage when you are 100% confident you can control the bar.

Use plenty of chalk

Prevent slips by chalking your hands before each and every set. Sweaty hands can cause serious suicide grip accidents. If your gym doesn’t allow chalk, use something like liquid chalk, which does not leave a residue.

Use bars with deep knurling

The knurling is that grippy pattern imprinted into barbells and dumbbells. While it can be rough on your skin, it also stops the bar from slipping. If you can, avoid very smooth bars when using the suicide grip.

Just because you aren’t using your thumb doesn’t mean you can’t grip the bar with your fingers. Make a conscious effort to squeeze the bar as hard as you can with your fingers to stabilize your wrists and forearms and maintain some control over the bar.

Ruring regular reps, the bar should remain in place on the heels of your hands. But, if you start cheating, the risk of the bar slipping increases. So, while strict overhead and bench presses should be pretty safe, trying to jerk or bounce the weight up means it’s more likely to slip from your hands and guillotine your neck.

Use it because you need it

Weigh up the pros and cons before using the suicide grip. If you have shoulder pain, it may be advantageous. But, if using a regular grip doesn’t bother you, there is no need to risk the suicide grip. So, don’t use it just because you think it looks cool!

It’s obvious why the suicide grip is so divisive. On the one hand, it may save your shoulders from wear and tear and take pressure off your wrists. But, on the other hand, just one slip could mean serious injury, months of recovery and missed workouts, and even death.

Weigh up the pros and cons before using the suicide grip in your workouts, as the drawbacks may outweigh the benefits.

How much attention do you pay to your grip during your workouts? If, like most lifters, you just grab on...

How to Build a Stronger Grip at Home

Your hands and forearms are, anatomically speaking, immensely complicated. Made up of dozens of muscles, your hands are capable of...

The 7 Best Grip Variations For Bodybuilding

If you want to get the most from your workouts, you need to mix things up from time to time....