Phillip Herndon is aiming to break the All-Time World Record Raw Squat and is currently just 5-kg (11-lb) off. 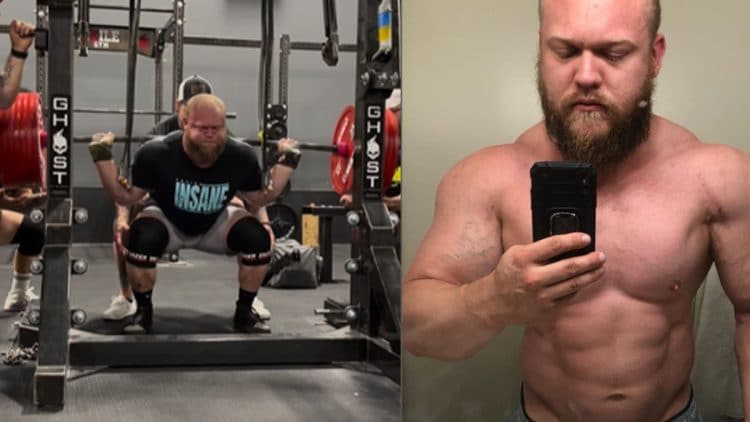 Phillip Herndon has been dominating the squat with wraps in the 110-kilogram weight class for some time now. However, to further assert his dominance, Phillip wants to become the greatest in the raw division as well.. He has been training hard and the results have been impressive, as he has been claiming new PRs for the past few weeks. Phillip Herndon posted a massive 385-kilogram (848.8-pound) squat PR on his Instagram account on June 11, 2022.

Phillip Herndon’s new squat PR is raw, as he only used a lifting belt, knee sleeves, and wrist wraps to aid him in this impressive feat of strength. Although it is still not heavy enough to break the world record, Phillip’s squat is just 5 kilograms (11 pounds) away from it. Kevin Oak holds the current raw squat record of 390 kilograms (859.8 pounds), and he set it at the 2020 WRPF Hybrid Showdown II.

The ease with which Phillip Herndon moved the 385 kilograms (848.8 pounds) makes it seem like he could add those few kilograms right now. However, Phillip is preparing for the 2022 WRPF American Pro, which will take place on July 29-30, in Manassas, VA. With almost two months left, it is not impossible that Phillip becomes the first athlete in the 110-kilogram weight class to squat 400 kilograms (881.8 pounds) raw.

Might almost be time to take the sleeve ATWR.”

Phillip Herndon is only 26 years of age and has already made a significant impact on the sport of powerlifting. If he is successful in breaking the raw squat World Record, Phillip will undoubtedly become one of, if not the greatest, pound-for-pound squatters in the world.