Peiman Maheripourehir displays his strength with a humongous deadlift double. 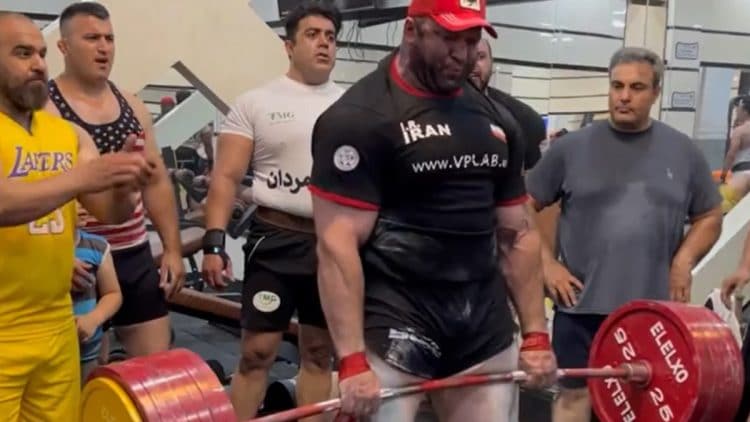 Peiman Maheripourehir is back to doing what he does best, as the deadlift specialist has posted another impressive feat of strength. He is one of the favorites to claim the World Record deadlift alongside Ivan Makarov, as the Iranian came really close last year. Peiman will get another chance soon, so his preparation is well on the way. To give an update on where he is standing currently, Peiman shared a 405-kilogram (892.9-pounds) deadlift double from training. However, it was far from an ordinary pull, as he did not use a lifting belt.

Peiman Maheripourehir’s monstrous feat of strength was even raw by Strongman regulations, since he did not use a deadlift suit. He did use lifting straps, which are not allowed in powerlifting, but they are allowed in Strongman. According to a rough translation of Peiman’s captions, he deadlifted 340 kilograms (749.6 pounds) for nine reps after.

Peiman Maheripourehir missed out on competing at the 2022 World’s Strongest Man because of visa issues. However, he is now looking forward to making an appearance at the 2022 Giants Live World Open & World Deadlift Championships, which is scheduled to take place on Aug. 6, 2022, at the Motorpoint Arena in Cardiff, Wales. Peiman Maheripourehir will attempt to deadlift 505 kilograms (1,113.3 pounds) to break Hafthor Björnsson’s Deadlift World Record. If he is successful in doing so, Peiman will receive a prize of $50,000.

Peiman Maheripourehir has already deadlifted 492 kilograms (1,084.7 pounds) in training, which is one of the heaviest pulls in history. He was never able to pull as much in a sanctioned competition, but did come really close to it. Peiman’s greatest deadlift in a competition was 481 kilograms (1,060.4 pounds), which he accomplished at the 2021 WRPF World Championships.

Although Peiman is mostly recognized for his deadlifts, he has also made two appearances at the most prestigious Strongman competition. Peiman was very successful in the 2017 WSM, as he finished just behind Nick Best and Zydrunas Savickas in his group. He had a bit worse placement the following year, but his group was even more stacked as he competed against Hafthor Björnsson, Laurence “Big Loz” Shahlaei, Marius Lalas, and Rob Kearney.

Peiman Maheripourehir is definitely on the right track to breaking the World Record in one month’s time. Nevertheless, he’ll be one of the favorites if things go well in the next couple of weeks. We will see soon if Peiman gets used to a deadlifting suit, which will also play a big factor when the time comes.