After hitting a personal best with his squat last week, and ahead of his competitive return, Anthony Krznar extended that number even further 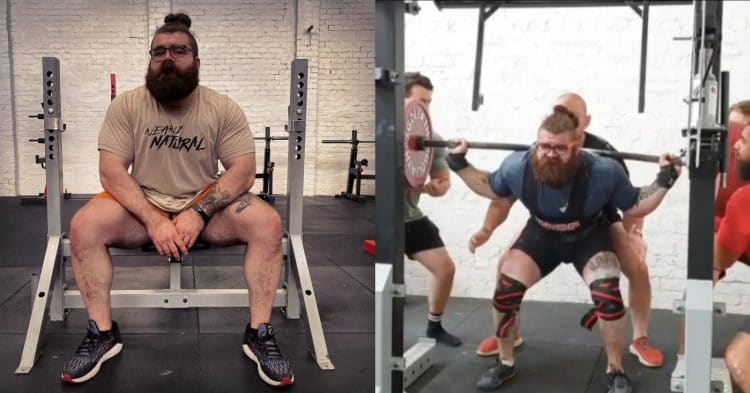 It has been more than a year since Anthony Krznar last competed as a powerlifter. Ahead of his long awaited return, he has been hitting some crazy numbers in the training room.

While he is still in his twenties, it has been a while since Krznar has appeared in a major powerlifting meet. He is approaching his sixth year in competition, and along that path, he has looked sharp 120kg division.

His most recent event was the 2019 Australia-VIC Pacific Invitational, but he is looking to get back to action. He is preparing for his first contest in more than a year, when he competes on February 21st.

The preparation for the long-awaited return of Anthony Krzner has been going well, to say the least. The young powerlifter has been documenting his prep throughout posts to his Instagram, each one better than the last.

The most recent of these updates saw The Australian Yeti, as he is affectionately called, score a new personal best. This came in the form of a massive  926lb (420kg) squat, that he made look effortless.

A massive PB, and I fixed everything that went wrong last week. This fills me with so much confidence for comp on Feb 21.

Thank you so much to everyone that’s come down every week to help me. You guys are the best 🖤”

This was a strong performance, and it was clear that Krznar was excited about it. He demonstrated this with some awkward head thrusting after the fact, a moment that he apologized for failing to edit out.

The feeling of setting a new personal best is one that a lot of people find thrilling, and Anthony was riding that momentum, even the next day. He followed that post up with another to explain the emotions he was still going through.

“Still on cloud 9 from yesterday.

So many shares, follows and messages, thank you so much 🖤

It’s surreal that so many people want to support me lifting heavy and talking about things like mental health.”

However it is understandable why Anthony Krznar was so excited by this. Not only did it blow away even his own expectations, but it was an improvement from an already impressive squat from the week prior.

He posted another video of him doing an 893lb (405kg) squat, which was the PR for him at the time. The form on this one was a bit shakier though, so he was able to make the improvements to push the weight up, and break the PR just one week later.

This was an insane performance from Anthony Krznar, and one that has people buzzing to see him return to competition. It has been a long time coming, and it will be great to see how far he has come.