Powerlifting teen Morgan Nicholls is described by his bodybuilding coach father as a "rare breed" after his latest bench press. 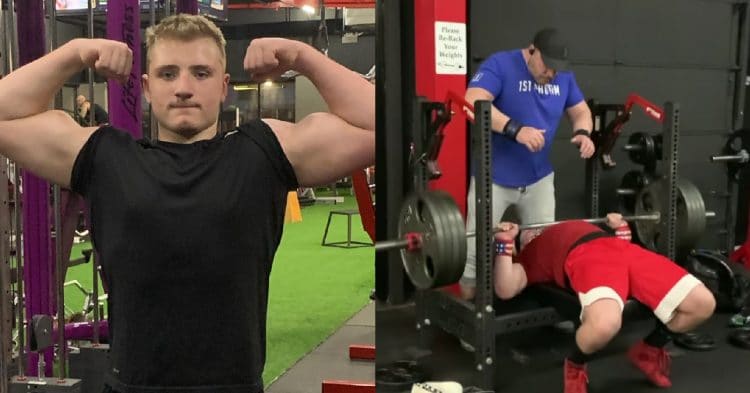 Powerlifting prodigy Morgan Nicholls has done it again, and this time he is bench pressing twice his weight. Now, his bench press level has gone up 75 pounds in a year. This week he shared a performance where he bench pressed 184kg/405lbs for one rep, a goal he has been aching for, for some time.

The lift was posted on Morgan Nicholls’ Instagram. He said it was a “HUGE” PR today.

And so he did. Watch the session below.

It appears effortless to Nicholls. He pumped himself up before he lifted, and had his dad, infamous bodybuilding coach Chad spotting him.

It was just a training session for Nicholls, but also a personal record in training. His bench press is 70 pounds over what he did last year, and 47 pounds over records in international competitions in his weight class of 90-kg/198lb.

Morgan’s mother is no slacker either. She is Kim Chizevsky-Nicholls, and a former Olympia winner herself. She has won Ms. Olympia four times between 1996 and 1999.

Chad Nicholls shared the lift as well, with his pride for his son evident. This is a man who has coached Mr. Olympias, and called it, “one of the craziest things I’ve ever seen in a gym.”

Chad also proudly referred to his son as not having “an off switch” and said Morgan was “a different breed.”

Even though this may be some fatherly pride, we don’t think Chad Nicholls is far off the mark at all. Watching Morgan bloom in this field is going to be exciting for all of his fans.

We don’t know when Morgan will compete again, the pandemic is making competitions scarce for all athletes across the globe. His last comp was in the Teenage 13-15 division of the Southern Powerlifting Federation GP Summer Smash in Springfield, May 2020.

We will keep you posted when Morgan Nicholls announces his next comp.