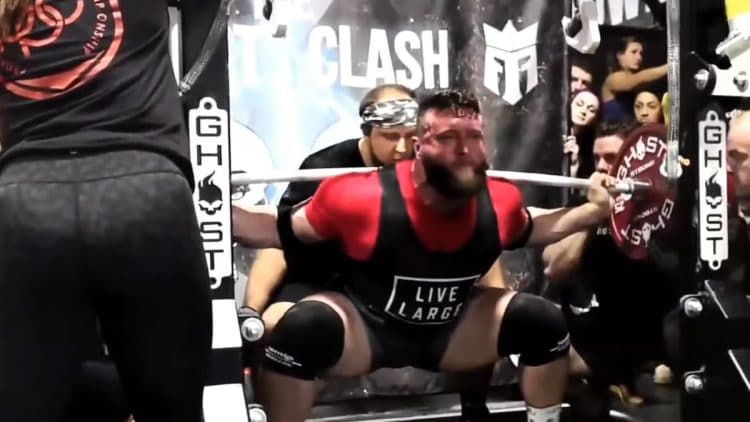 Powerlifting titan, Shane Haller, is usually recognized for his sheer size, standing at 2 meters (6-foot 6-inches) tall, and weighing 139 kg (306.4 lbs). He is also a powerlifting prodigy, which he proved at The 2022 Ghost Clash, held on February 13th, 2022, in Miami, Florida. Shane dominated the field to grab first place but also set a new All-Time World Record Raw Squat of 420 kg (926 lbs) in the 140 kg category.

All three of Shane’s squat attempts were successful. His opener weighed 385 kg (848.9 lbs), which he did with ease. On the second attempt, Shane equalized his PR of 410 kg (903.9 lbs), and the last attempt was the world record 420 kg (926 lbs). It was a long and exhausting rep, but he pushed through and claimed the record.

Shane’s squat was a great way to start the competition and gave him an enormous advantage, but he still had to perform well in the bench press and deadlift to win. He did just that and secured himself a $5,000 first-place award. The winner was judged by the WILKS score, and Shane Haller’s score came out to be 595,513.

Courtesy of Alpowerliftingtv YouTube channel, you can watch all his lifts here:

Shane has been competing in powerlifting since 2016, and has played collegiate football before. He has competed in 11 sanctioned competitions and won 10 of them. Most notably, he came first in the 140 kg category at the 2021 WRPF The Bucked Up Showdown.

If Shane managed to deadlift 405 kg (892.9 lbs), he would have broken the 140 kg category Total World Record, which is held by Larry Wheels. In addition, His WILKS score would be over 600, which has only been done 4 times in the men’s raw category. Shane will definitely keep improving, and break through these milestones.