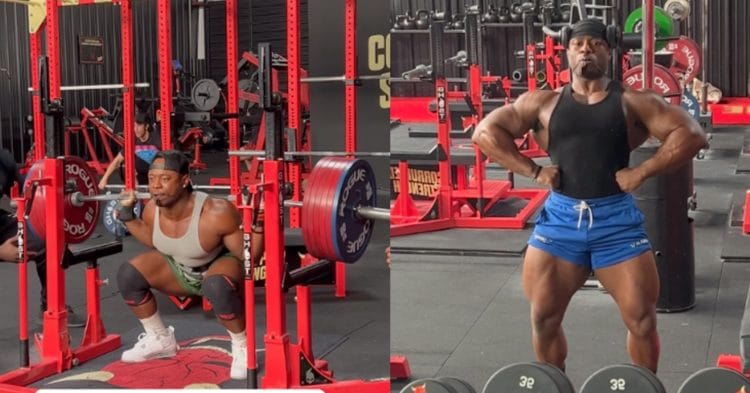 The 2021 IPF World Champion, Russel Orhii, looks unstoppable currently, and it seems like it won’t stop soon. Russel holds the IPF World Record Squat in the 83 kg category, but he is still improving. His latest Instagram post showcased a new Squat Rep PR, where Russel demolished a 310 kg (683 lbs) squat for three repetitions.

Russel used a lifting belt, knee sleeves, and wrist wraps, while his lifting style was a low bar. His official competition best is only 13 kg heavier, so to see him easily doing repetitions with this weight is nothing short of impressive.

Even Russel seems surprised by how quickly he is gaining his strength.

“This is getting ridiculous. The numbers keep getting bigger and bigger📈,” wrote Orhii.

The squat is Russel’s best event, but he is not neglecting the other events. Following his holiday rest, Russel has been working hard to improve his bench press, which is his weakest event. Just a day before his squat PR, he published a Bench Rep PR. Russel pressed up to three reps of 192.5 kg (424 lbs), while his competition PR is just 2.5 kg (5.5 lbs) heavier.

Russel is posing at the end of the video because he intends to compete in a bodybuilding show sometime this year. He is trying to balance his training between strength and aesthetics.

Russel’s deadlift is on par with everything else. Just three days ago, he posted a video which showcased him trouncing a 290 kg (639 lbs) deadlift for 5 easy repetitions. He used a lifting belt, while his style was conventional and his grip was mixed.

“I’m also posing more in between sets to get ready for my bodybuilding show,” wrote Orhii

Russel Orhii’s career is filled with success. He has also won all sanctioned competitions in which he took part, besides the 2018 IPF World Classic Powerlifting Championships, where he came second. He is a 2x IPF World Champion, and a 5x USAPL Raw National Champion.

Russel holds two 83 kg category world records in the IPF, both records were set at the 2021 IPF World Classic Powerlifting Championships, his results were:

Russel hit a Squat PR of 332.5 Kilograms (733 Pounds) in training a couple of months ago. If he had done it in an IPF sanctioned competition, the World Record would be broken by 12 kg (26.5 lbs).

Related: Russel Orhii Shares His Off-Season Workout, And It Is Harder Than You Think

Russel Orhii’s strength and physique look amazing. He seems to have found a perfect balance between powerlifting and bodybuilding training, which resulted in new Rep PRs. He also revealed that he started dieting. If anyone can be successful in both sports, it would be Russel Orhii.