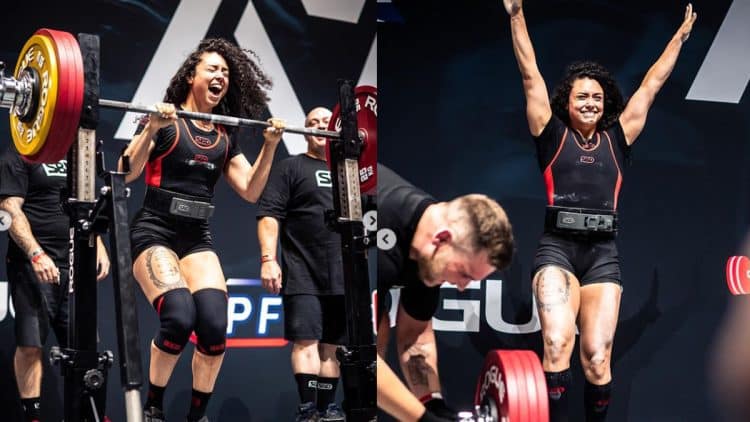 Precillia Bavoil suffered a devastating heartbreak a few months ago when she registered to compete in the 2022 IPF World Classic Powerlifting Championships, but came in heavier than what her weight class permitted. Thus, she was disqualified and could not defend her title as World Champion. Her immediate response was to vow to be more responsible, and the situation fuelled her training sessions. Therefore, Prescillia was in excellent physical condition when it was time for her to perform at the 2022 Arnold Sports Festival UK.

Prescillia Bavoil competed in the raw 63-kilogram weight class of the 2022 Arnold’s UK. She opened up her performance with a 213-kilogram (469.9-pound) IPF World Record squat. Bavoil also held the previous record of 205 kilograms (451.9 pounds), which she set at the 2021 IPF World Classic Powerlifting Championships. It seems that the records at the 2022 Arnold’s UK counted for IPF, since the ‘British Powerlifting’ federation (IPF affiliate) sanctioned it.

Prescillia Bavoil also broke the deadlift World Record with a 231-kilogram (509.3-pound) pull. She utilized a conventional stance and a mixed grip to beat the previous record by 0.5 kilograms (1.1 pounds). Prescillia also held the previous record, having set it at the 2021 IPF World Classic Powerlifting Championships.

With a massive performance at the 2022 Arnold’s UK, Prescillia Bavoil became the first woman in the IPF to achieve a 600 DOTS Score. Amanda Lawrence is now in second place with a score of 588.15. So, Prescillia Bavoil is now the pound-for-pound strongest women’s powerlifter in the IPF.

Watch all the lifts here:

This was Prescillia Bavoil’s 22nd sanctioned powerlifting competition and her 20th victory. Bavoil is almost satisfied with her impact on the 63-kilogram weight class. So, she “can picture slowly moving for good to 69 weight class in a really close future”. Prescillia stated this on her Instagram story, so it seems that a jump up in bodyweight is imminent.

Prescillia Bavoil has already competed in the U69KG a few times, but she has never dedicated herself 100% to it. So, once she does, Prescillia could be the queen of both the 63s and 69s.