The eight-time Mr. Olympia believes 'not much' will change at this year's Mr. Olympia show unless competitors bring improved conditioning. 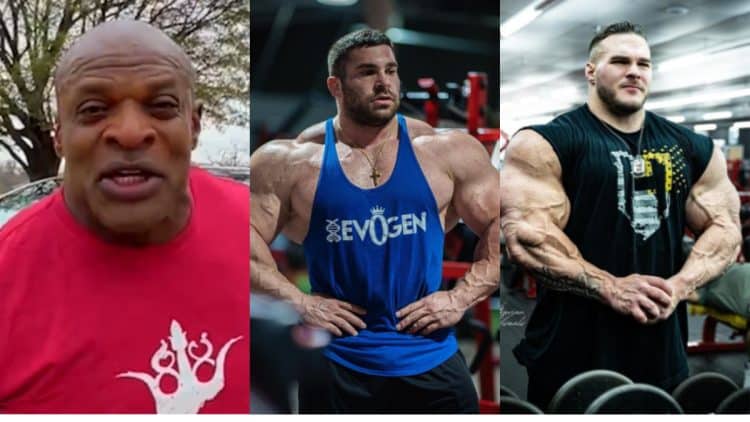 Bodybuilding legend Ronnie Coleman’s illustrious career has come to an end, but that hasn’t stopped him from discussing the sport’s finer details at length. In a recent video shared on YouTube, Coleman opened up about his health and gave his thoughts on the Men’s Open lineup at the 2022 Mr. Olympia contest.

“I don’t see much changing between Brandon, Ramy, and Hadi — I don’t see nobody beating them,” Coleman said while looking at the 2022 Olympia lineup.

The Men’s Open division has seen a number of significant moments this year. Rising prospects and rookies continue to emerge like Andrew Jacked, who just earned his Pro card in March. Already, his shape, muscle bellies, and aesthetics have guided him to a pair of first-place finishes at the 2022 Texas Pro, and his latest victory — the Arnold UK contest.

Though, it’s not just Jacked that Men’s Open bodybuilders are looking at. Slovakia’s Michal Krizo has garnered a lot of hype despite having yet to earn his Pro card. Bodybuilding veteran Milos Sarcev and four-time Mr. Olympia Jay Cutler agree that Krizo will be a problem for the Open class. In order to fulfill those lofty expectations, Krizo will need to win his next endeavor at the 2022 Amateur Olympia Italy contest.

While there is plenty of talent making its way into the Men’s Open division, eight-time Mr. Olympia Ronnie Coleman is not expecting it to have a major impact on the 2022 Olympia results this December. However, he does believe 212 Olympia winner Derek Lunsford and Nick Walker could be wild cards. With only 12 weeks until bodybuilding’s biggest show, Coleman sat down with Dennis James and Chris Cormier to give his thoughts on some of the standout contenders.

During the interview, Coleman discussed this year’s Olympia lineup. He believes unless there are drastic changes to conditioning, the top three from last year’s (2021) Olympia contest are likely to retain their positions.

“I don’t know about the best Mr. Olympia ever. Unless they’re going to change their conditioning. I don’t see it changing too much,” says Ronnie. “No, [I haven’t seen Andrew Jacked]. I don’t see no one doing nothing different, you know. Yeah – I saw what he looked like. I wasn’t like real, real impressed or nothing. Average guy. I don’t see him beating none of the guys from top three last year.”

Despite the impact Andrew Jacked has made on the league in a short period of time, Coleman doesn’t see him being a problem for Hadi Choopan, Brandon Curry, and Big Ramy. Though, he does believe Derek Lunsford and Nick Walker have a chance at disrupting the lineup.

Before discussing his past cycle and overall health, Coleman spoke on whether reigning 212 Olympia winner Derek Lunsford deserved the special invitation that he received a few weeks ago.

“I think that’s good [Derek got a special invitation]. He deserves it. It wasn’t like he wasn’t a Mr. Olympia already. See, if he’s like this guy who hadn’t placed or won the Olympia, then I might have an issue with it. But since he won the Olympia, I think it was justified. Plus, he’s got a physique on that level too. He can do some damage. He can make the top five for sure.”

Given his previous achievement, Coleman doesn’t have a problem with Lunsford getting the invite. He added that he could place in the top five because he’s got a physique that’s comparable to Open class competitors.

Coleman Opens Up on Stem Cell Therapy and First Cycle

After discussing this year’s Olympia lineup, Coleman was asked about stem cell therapy and his first cycle.

According to Coleman, stem cell therapy has been an effective pain management solution.

“Yeah, that’s where I was [getting stem cell therapy]. I can tell a big difference,” said Ronnie Coleman. “It’s an IV. Yeah exactly, it goes all over the body because you never know where your body is going to be hurting so. It goes all over and it works real good. I was in a lot of pain for a long time. It [the pain] went away four or five days later.”

“I have to keep going all the time. I’ve had five treatments so far,” Coleman shared. “They want you to do it every three or four months. Just once [a month]. All it takes is one. They give you so many millions of stem cells — the last time I went, I got 350 million. The time before that I got like 300 million. I saw more stem cells they give you, the better it works. It’s so expensive, about $4,000 a treatment.”

“They don’t offer that [stem cell treatment] in United States. It’s from the umbilical cord. They don’t offer it here. They want to keep your ass on pain medication, said Ronnie.

When asked about his first bodybuilding cycle, Coleman said he didn’t remember what he used but shared that Flex Wheeler knew all of that information.

“I don’t remember. It’s been so long ago. I had talked to Flex [Wheeler].”

“You got to remember your first cycle,” Chris Cormier laughs.

“No – I don’t. I didn’t know nothing about nothing back then, you gotta remember.” says Coleman. “If you talk to Flex, he can tell you. I got it from him. Whatever he told me, that’s what I got.”

“The King” Shares His Diet That Led to Bodybuilding Success

As one of the biggest mass monsters to ever grace an Olympia stage, Coleman was tasked with eating a staggering amount of food daily.

“Those six meals a day… you’re forcing food down,” said Coleman. “Yeah, I was doing like 100 [grams] of carbs a day. That’s like maybe two small meals, that’s nothing. By the time I get to the workout, it’s all burnt up — it’s gone.”

Coleman maintains that vegetables were never part of his diet plan, though baked potatoes were an exception. Unlike his successor Jay Cutler, who ate 140 egg whites a day, Coleman kept things simple with just steak, chicken, turkey and potatoes.

“No vegetables, come on Milos, you know better,” Coleman said. “Yeah, a baked potato. Always steak and chicken, always. Steak, chicken, and turkey. Never eggs. Never. No eggs, just streak, chicken, turkey, potatoes, and rice. Fried chicken, fried turkey. Yeah every morning [I ate] grits. I switched to oatmeal for carbing up though. We did the honey flavor, yeah it was an apple pie filling. That was like everything.”

The 58-year-old may have hung up his posing trunks but hasn’t stopped lifting weights and working out. While countless surgeries have affected his ability to walk unassisted, Coleman continues to train. In one of his latest sessions, his legs became numb, so he finished the incumbent bike workout with his arms instead.

Coleman believes Men’s Open standouts like Nick Walker and Derek Lunsford could shake things up on the 2022 Olympia stage. However, he’s not ready to count out the top three from last year’s show despite a number of new contenders emerging in the league.