Rauno Heinla will be looking to further improve and make the record official in a couple weeks. 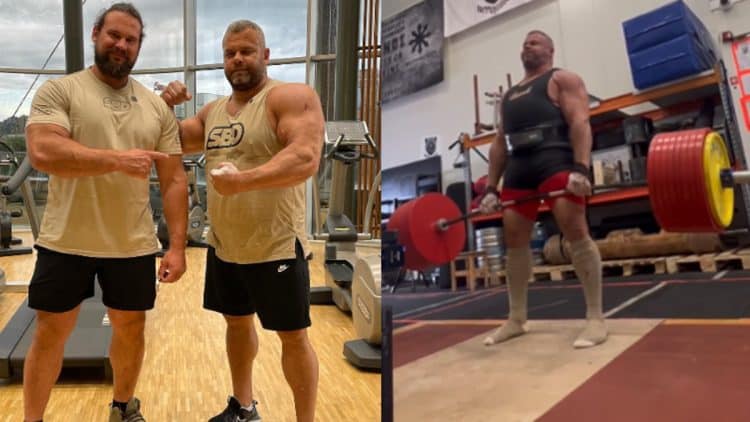 Rauno Heinla recently turned 40 and appears to have gained strength as well. He is now eligible to compete in the Master’s division, which is for athletes over 40 years old. Well, Rauno immediately left his mark, as he just unofficially broke the Master’s Deadlift World Record. He shared the video footage of his newest achievement on Instagram, showcasing his 450-kilogram (992-pound) deadlift in training.

Mikhail Shivlyakov officially holds this World Record, having pulled 436 kilograms (961.2 pounds) at the 2020 WUS Feats of Strength. However, it seems that his record won’t stand for much longer, since Rauno Heinla is already pulling 14 kilograms (30.9 pounds) heavier.

Rauno Heinla used a deadlift suit, lifting belt, and lifting straps to aid him in his 450-kilogram (992-pound) deadlift. Heinla also had the support of Martins Licis, the 2019 World’s Strongest Man, who flew over to Estonia to train with him.

“450kg/992lb unofficial master’s record. Deadlift felt hard today. I’m still happy it went up, but definitely need some rest. I will get more weight up soon!”

Rauno Heinla will make an appearance in the 2022 Giants Live World Open & World Deadlift Championships, which is scheduled for Aug. 6 at the Motorpoint Arena in Cardiff, Wales. So, in less than one month, Rauno will most likely break the master’s deadlift World Record. Also, it is hoped that he will be ready to make an attempt to break Hafthor Bjornsson’s 501-kilogram (1,104.5-pound) All-Time Deadlift World Record. If Rauno is successful in doing so and deadlifts 505 kilograms (1,113.3 pounds), he could earn $50,000.

Rauno Heinla has been competing at the highest level of Strongman for many years now, but he is still not showing any signs of slowing down. He has taken part in 45 International contests and won four of them. Those are:

While Rauno Heinla’s 450-kilogram (992-pound) deadlift is very impressive, it is essential to note that he felt tired at the time. So, Rauno can definitely pull even more weight. With a few more weeks of training, it seems like nothing is impossible for him.

These Are The 8 Best Biceps Exercises According to Science!