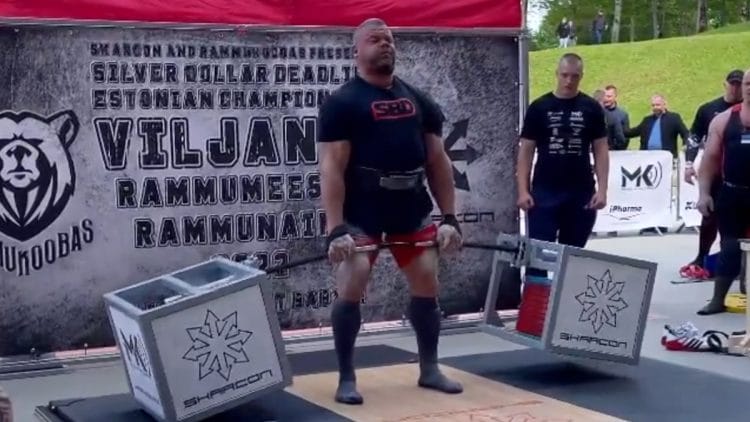 Rauno Heinla’s 2022 season started off in a very bad manner, as the Estonian had to withdraw from this year’s World’s Strongest Man due to stomach issues. Strongman fans were under the impression that the comeback of the Heinla would take a long time. However, he has very quickly turned things around and gotten back on track.

Rauno Heinla seems to have used a deadlift suit, lifting belt, and wrist wraps to aid him in breaking the World Record. In the setup of Rauno’s record lift, two boxes were filled with calibrated plates. Historically, these boxes were loaded with actual silver dollar coins, but the plates are more practical nowadays.

Rauno Heinla is in the lineup for the 2022 Giants Live World Open & World Deadlift Championships, which will take place on Aug. 6, at the Motorpoint Arena in Cardiff, Wales. As the competition is only two months away, it is most likely that it will be Rauno’s next official performance. Rauno will be one of the heavy favorites for the 505-kilogram (1,113.3-pound) deadlift World Record. Rauno Heinla has proved that he is capable of locking out a lot more than half a ton with his recent silver dollar deadlift.

At 39-years-old, Rauno Heinla is one of the most experienced Strongman competitors in the world. He has taken part in a staggering 45 competitions across 13 years. He had only one appearance in the World’s Strongest Man contest, which was in 2011 when Rauno placed fifth in his group.

Rauno Heinla’s greatest strength lies in the deadlift event, as he is always considered as a challenger for the world record. He excels in every deadlift variation, but it seems like the silver dollar is his greatest one. He has also previously pulled over 1,000 pounds (453.5 kilograms) on a standard deadlift.

With Rauno Heinla’s new silver dollar deadlift record, everyone has become intrigued with how much he can lift on a standard bar. Rauno still has two months to prepare for the Deadlift Championships, so it is a very realistic outcome that he claims another World Record.