Ray Williams remains consistent and puts up 1,003lbs in competition. 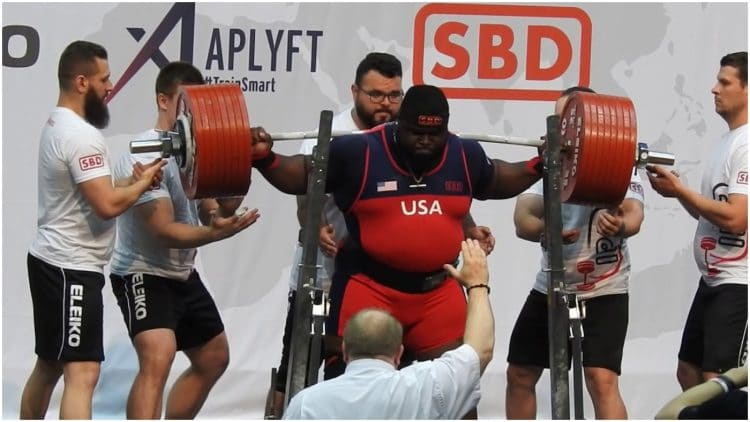 Powerlifting sensation Ray Williams is accustomed to breaking the internet with his massive lifts. Once again, the behemoth returned to the squat rack and put up an incredible 455kg/1,003lbs lift at the USA Powerlifting Virginia Pro.

Williams’ powerlifting ability and growth in the sport overall are incredible feats by themselves. However, the powerlifter is keen on making history. While Williams has hit that 1000lbs+ mark or higher before, that shouldn’t overshadow the gargantuan lift he just treated his fans to at the USA Powerlifting. After all, Williams is well on his way to being considered one of the greatest squat lifters to ever grace competition.

“Ray Williams is back with a 455kg / 1,003lb squat at the USA Powerlifting Virginia Pro🔥” Williams shared on Instagram.

Ray Williams is known for shocking the world with incredible squat lifts. At the 2019 Arnold Sports Festival, he lifted 490kg/1000lbs raw. As a clean athlete, Ray Williams’ raw squat record is an impressive one. Standing at 6’1, and nearly 400lbs, Ray Williams is one of the strongest and cleanest squatters to ever step foot on earth.

Williams has been breaking records in squat lifting rooms for years. In fact, in 2016 he shook the world after lifting 1,005lbs raw at the USA Powerlifting Raw Nationals. The titanic effort marked Williams as the first athlete to lift 1,005lbs raw with no weight suit. In addition, he also became the first powerlifter to squat lift over 1000lbs in a competition that practiced drug testing.

Despite the struggles Williams endured in 2019, he rebounded nicely since then. After his 455kg/1,003lbs squat at the USA Powerlifting Virginia Pro, the powerlifter is perhaps giving us a hint as to what will happen next. The world records start to fly when Williams feels the pressure mounting.