The powerlifting phenom and pro bodybuilder Hunter Henderson impresses in a recent meet. 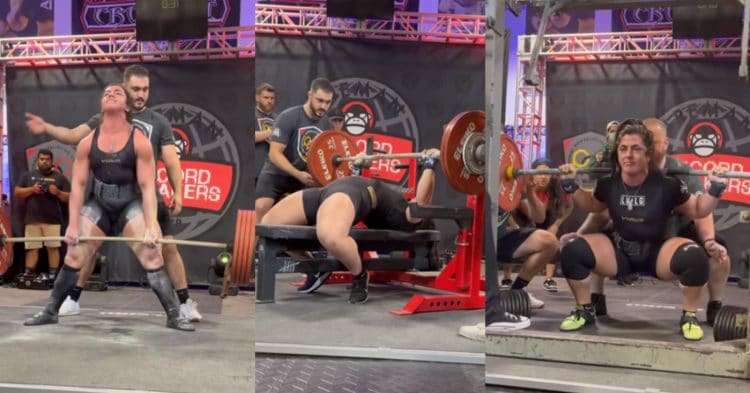 Hunter Henderson is back at it again with powerlifting after testing her skills in bodybuilding sports. In a recent meet, she pulled huge numbers and made hefty totaling 1,383lbs.

Hunter Henderson got the attention of the bodybuilding scene recently. The young upstart made her bodybuilding debut at the 2021 NPC USA Championship and earned her pro card. Prior to that, Hunter competed at the NPC Duel of Champions contest as an amateur. Shortly after earning her pro card, Henderson made the pro debut at 2021 Tampa pro and scored second place. Some fans were surprised to see her make such a smooth transition so quickly. That’s not new for athletes to take their talents from powerlifting to bodybuilding as Arnold Schwarzenegger, Ronnie Coleman, and Johnnie Jackson did it. Also from the woman’s side, Bev Francis and Marianna Gasparyan also performed well in both sports.

As a competing powerlifter, surely some of those qualities would translate into a different competitive setting. Henderson’s athletic ceiling is high and that is a wonderful attribute to have as an aspiring bodybuilder.

At just 25-years-old Hunter Henderson was crushing 600lbs deadlifts off blocks, so many saw promise in the upstart.  It will be interesting to see which ventures attract Hunter Henderson as more time passes. However, it is hard to ignore her powerlifting talents when totals of 1383lbs are knocking on the door.

Recently, Hunter Henderson took to Instagram to share some massive pulls during her latest meet at Record Breakers. The pro-bodybuilder wanted to show the steady improvements she’s worked on. After squatting 529lbs, pressing 314lbs, and capping it off with a colossal 540lbs deadlift, it’s safe to say with performances like that she may be hitting some world record numbers soon.

“Seven weeks ago I decided to jump into a meet. I had the pleasure of competing today at Record Breakers. I had an absolute blast today. Today was very special for me. My first meet back after bodybuilding. My first meet at 181. My first meet working with @jakeyb_43 and @joesullivan_aod.

The intention for this meet was to use it as a warm up for Hybrid. Squat 529 Bench 314 Deadlift 540I am so happy, grateful, and excited. I have the BEST people in my corner. I could go on and on about how great today was. Thank you all for the continued support! Ya’ll are great! My heart is so full♥️” Hunter Henderson shared.

Henderson put the world on notice when she competed at the 2021 Kern US Open in April. In a 75-kilogram category powerlifting phenom set all-time world records (ATWR) in both the squat (295 kg) and the total (702.5 kg).

Since Henderson’s intention was to use that meet as a warm-up, it’s a very exciting thought to imagine what she has in store for her fans next. It appears Henderson’s ceiling in powerlifting is sky-high. A total of 1383lbs is a wildly impressive feat, and regardless of what career path Hunter Henderson takes, the odds seem to be in her favor.

The powerlifting fans have had a lot to see in the past few days, and Krzysztof Wierzbicki's deadlift is like...