Rhianon Lovelace made a comeback to the sport of powerlifting and broke her second record in just two weeks. 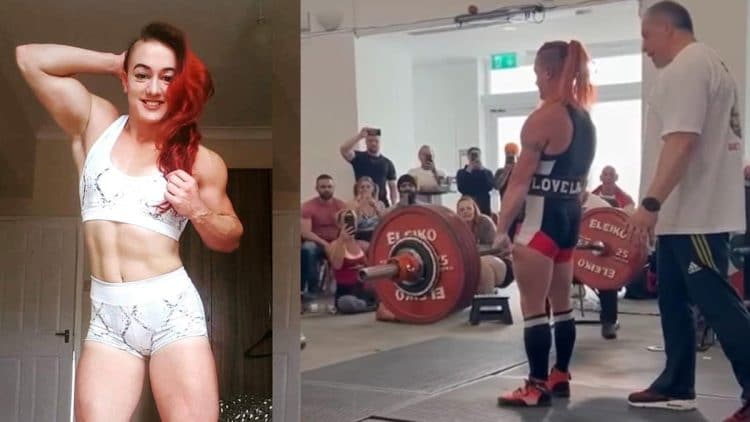 Just over one week ago, Rhianon Lovelace claimed a Lightweight Axle Deadlift World Record as a Strongwoman competitor. However, Rhianon has now made a temporary comeback to the sport of powerlifting and claimed a British Deadlift Record of 241 kilograms (530 pounds). She was able to do so at the 2022 BPU Single Lift British Championships, the Alan Collins Cup & The Bomb Squad, which took place on May 21-22, in Manchester, England.

Rhianon Lovelace broke the British Deadlift Record on her second attempt with a 230-kilogram (507.1-pound) pull. However, Rhianon had more in the tank, so she added 11 kilograms (24.2 pounds) and demolished the record. Despite weighing in at around 64 kilograms (141 pounds), Rhianon has deadlifted more than anyone in the BPU federation across all weight classes.

Rhianon Lovelace is used to using lifting straps in Strongwoman, but because of the powerlifting regulations, she was only able to utilize a lifting belt. This posed no problem for her, as her mixed grip turned out to be strong enough. Rhianon also performed with a conventional stance, as she does in Strongwoman.

“Haven’t prepared for this, was totally unsure what to open with as I deadlift with straps and a hitch (Strongwoman) but super excited to see what’s possible with a good peak!

Rhianon Lovelace says she’s done powerlifting before in the caption of her post. She last competed at the 2017 BPU British Championships. When she returned to the sport after taking a five-year break, she broke a National record. As a powerlifter, Rhianon became a WPC World Champion at only 18-years-old. She was also the first British female to squat 3x her bodyweight and was crowned as the WPC European Champion in 2016.

After a very successful powerlifting career, Rhianon Lovelace dedicated herself to the sport of Strongwoman. She continued her incredible performances there and is considered one of the greatest athletes currently. Rhianon competes in the 64-kilogram weight class of Strongwoman and holds multiple World Records there.

Rhianon Lovelace won the 2018 U64KG World’s Strongest Woman, which is one of the brightest moments in her career. She has also been pronounced the pound-for-pound strongest woman in the world after winning Eddie Hall’s challenge. Some of Rhianon’s other notable accomplishments are winning Britain’s and Europe’s Strongest Woman contests.

Rhianon Lovelace has claimed two major records, under two separate sporting organizations, in a brief time span. This is one of the biggest reasons why she is one of the greatest athletes in the world across all sports. Now it will be interesting to see if Rhianon decides to take up powerlifting full time in hopes of breaking more records or sticking with Strongwoman.