With a 515-pound axle deadlift, Rhianon Lovelace has now broken all variations of the Lightweight Deadlift World Records. 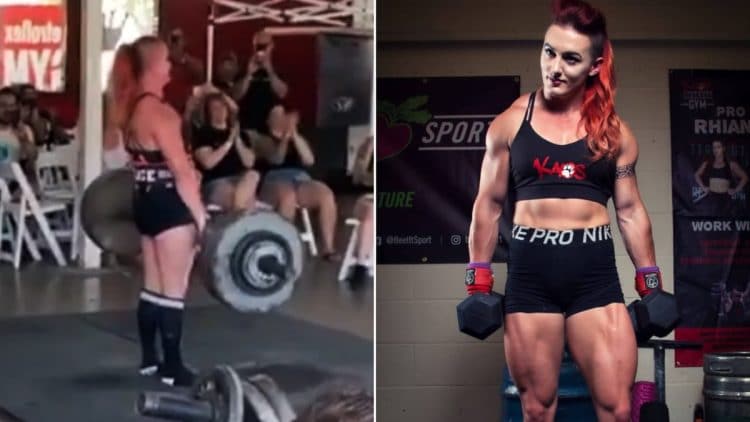 Considered one of the greatest pound-for-pound Strongwoman athletes, Rhianon Lovelace is dominating the 64-kilogram weight class. Her most recent outing was at the 2022 Clash of the 64’s, which took place on May 14, in Plano, TX. Rhianon was crowned as the champion, but also claimed a new Axle Deadlift World Record of 515 pounds (233.5 kilograms) in the lightweight division.

Event two of the 2022 Clash of the 64’s was the ‘Last Woman Standing Deadlift’ and it incorporated the axle barbell. Rhianon Lovelace won the competition with a 495-pound (224.5-kilogram) pull, but decided to load 20 pounds more and break the World Record on her next attempt. Rhianon only used a lifting belt and a pair of straps to help her set a new record. Considering that she competed in the 64-kilogram weight class, Rhianon Lovelace deadlifted at least 3.6x her bodyweight.

I have now officially broken all the Deadlift LW WRs (Normal Bar, Silver Dollar and Axle).”

Rhianon Lovelace At A Glance

Coming from the UK, Rhianon Lovelace has been excelling in strength sports for many years now. She started her career as a powerlifter and became a WPC World Champion at only 18-years-old. Rhianon also became the first British female to squat 3x her bodyweight. Rhianon’s deadlift prowess had a huge carryover from powerlifting to Strongwoman, which helped her achieve great things.

Since moving on from powerlifting, Rhianon Lovelace has displayed some incredible feats of strength as a Strongwoman athlete. Rhianon has too many world-class achievements to list them all, and she is still in her mid-twenties, so there is undoubtedly a lot more to come.

Some of Rhianon Lovelace’s Greatest Achievements

Rhianon Lovelace was also the pound-for-pound strongest woman in 2020 after taking part in Eddie Hall’s challenge. She deadlifted 577 pounds (261.7 kilograms), and clean & pressed 223.5 pounds (101.4 kilograms) to claim this title.

Rhianon Lovelace has once again proved how powerful she is, and why she is considered one of the greatest ever. Her lifts always amaze everyone, but the 515-pound axle deadlift is beyond impressive. It is always exciting to watch Rhianon compete, as it seems like she is living for the sport and heavy lifting. It’s unclear when she’ll compete next, but it’s evident she’s got something pretty big in store.