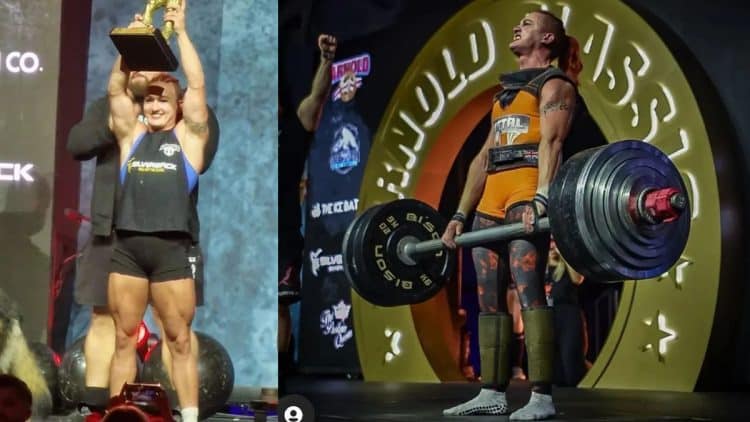 This past weekend was an eventful one for many fitness communities, and a major reason was the 2022 Arnold Sports Festival UK. It gathered the world’s best bodybuilders, powerlifters, and many more athletes. However, despite the action going on in multiple places at once, those who decided to watch the Strongwoman competition definitely did not regret it. The 2022 Arnold’s UK Strongwoman Pro took place on September 23-24, where the women took part in six events. After two days of pushing themselves to the breaking point, Rhianon Lovelace came out victorious in the 64-kilogram weight class.

Despite leaving her all on the Strongwoman stage for those two days, Rhianon Lovelace still had enough energy to go for a World Record on Sunday, September 25th. The record in question was the Axle Deadlift. Rhianon was successful in accomplishing her goal and now the World Record stands at 261.5 kilograms (576.5 pounds). Interestingly, this is not only a record in the 64-kilogram weight class, but also in the heavyweight division as well. So, Rhianon has just completed the heaviest women’s Axle Deadlift in history.

“The Biggest Axle Deadlift ever done by any Strongwoman ❤️

You can tell how much this meant

After competing for 2 successful days, (with tough competition so i couldn’t take it easy) to win the Arnold Pro Title, running off 3 hours Sleep, I was doubting myself. I knew I was going to need to go somewhere Dark to get this done.”

Seeing that Rhianon Lovelace only weighed 63 kilograms (138.9 pounds) at the time of the recent lift, it means that it was 4.1x her bodyweight. Rhianon used a deadlift suit, lifting belt, and lifting straps to complete it, but all of the mentioned equipment is allowed in Strongwoman.

This has been an incredible year for Rhianon Lovelace, as she now holds a number of World Records. Many of them came very recently, most notably the 282.5-kg (622.8-lb) standard deadlift World Record. With the addition of the new Axle Deadlift achievement, Rhiannon is now in possession of two heavyweight World Records, with another 14 World Records across all weight classes.

One thing is certain, Rhianon Lovelace is constantly justifying her title of Pound-For-Pound Strongest Woman, which she acquired through Eddie Hall’s challenge in 2020.

Rhianon Lovelace has had one of the most successful weekends in her life, as she is coming home with a major victory from Arnold’s UK Strongwoman Pro, as well as some records. There is no indication as to whether she will rest and recover, or if she will pursue another endeavor right away.